Editor’s Note: This whiskey was provided to us as a review sample by Western Spirits Beverage Company. This in no way, per our editorial policies, influenced the final outcome of this review. It should also be noted that by clicking the buy link towards the bottom of this review our site receives a small referral payment which helps to support, but not influence, our editorial and other costs.

Sam Houston Bourbon Whiskey is an American whiskey done in tribute to the life of their namesake, a soldier and statesman who defeated General Santa Anna at the Battle of Jacinto, April 21, 1836. Houston was known as a man of principle who was brutally honest. He was the president of the Republic of Texas two different times, as well as later serving as a senator to the United States Senate.

I’ll admit, this was my first encounter with the Sam Houston label for several years. My first taste from the brand was their American Straight Whiskey. I recall it being good, not great at the time, but that was a while ago. As we all know, things change. Sam Houston has changed gears and has focused on more select releases. This is the fourth edition of the select whiskeys, with previous versions being blends of 12 year bourbons.

The latest Sam Houston, according to those behind it, takes the form of a 14 year old Kentucky Straight Bourbon Whiskey. It was crafted, it is said by the brand, “from specific barrels in a private reserve of premium bourbon. The barrels were sampled, ranked, and then combined in extremely small, 3-barrel batches for each particular state.”

What does the brand mean by batches for each “particular state”? Looking further into the various releases, it does appear that there are different three barrel blends made per state that it is available in. For example, here are the statistics and tasting notes for the Texas blend in batch three. It’s an interesting way to market your wares. 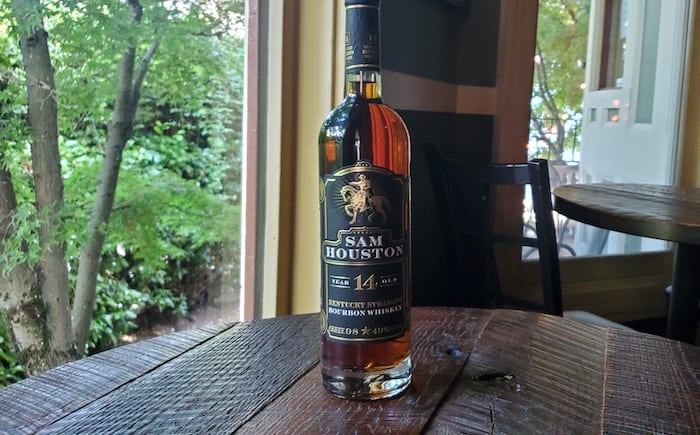 Appearance: Somewhere between a lighter red or a dark orange. Upon giving the glass a swirl discovered some slower, long legs.

Nose: The nose here is pretty straight forward. Heat and honey right off the bat and not much else. I took a moment for the senses to adjust and later noticed hints of some oak and caramel.

Palate: I was surprised by how light the body was on this one compared to the blast of flavor once it hits the palate. If you can imagine, caramel flavors accented by flamed orange zest. I was expecting more oak, given the age of the whiskey, but then again, any more and it may have thrown off the balance.

This was a solid middle of the road whiskey. The flavors were simple, but worked well together once you get accustomed to the bit of heat to start. It did definitely balance out a tad bit more with the addition of some water or an ice cube. However, given the price point of $120, I'd probably give this one a pass, at least for a bottle purchase.

And yet, given the per state blends, I wouldn't mind checking out a few different releases as a tasting experience. One may wonder if there were any particular differences between East and West coast releases.