Editor’s Note: This whiskey was provided to us as a review sample by Rush Creek Distilling. This in no way, per our editorial policies, influenced the final outcome of this review.

Rush Creek is a distillery that was founded in 2017 in Harvard, Illinois as a partnership between four friends who enjoy the craft of distilling. One of the owners is the former Mayor of Harvard, which is of note because they are the first distillery in the local county there and seem to have quickly become a staple within the community. Named for the Rush Creek aquifer from which they draw their water, the emphasis is placed heavily on local sourcing and the quality of the natural resources available to them.

Rush Creek is currently selling a fairly standard opening line up of vodka, gin and two whiskeys. The local market seems to have been receptive, as Rush Creek has produced over 15,000 bottles of their core lineup in the last two years. As of now, both whiskeys are sourced, though they are moving to an in house distilling and aging program, as well as developing rums and other more diverse spirits. Their Trophy Whiskey, which will be reviewed today, is the older of the two, at nine years of age.

Distilled in Kentucky from grain and aged nine years, the owners describe it as an orphan barrel, a popular term for aged whiskey which conveys little to no actual information. It is finished and bottled at Rush Creek.  Interestingly, it is listed as a grain whiskey rather than bourbon. Their American Gold Whiskey is five years old, which is about the standard age for a mass market, non age statement bourbon. Much ado is made in their marketing materials about both the soil and the water in Harvard, though a sourced grain whiskey is perhaps not the best vessel to convey the nuances of their terroir. 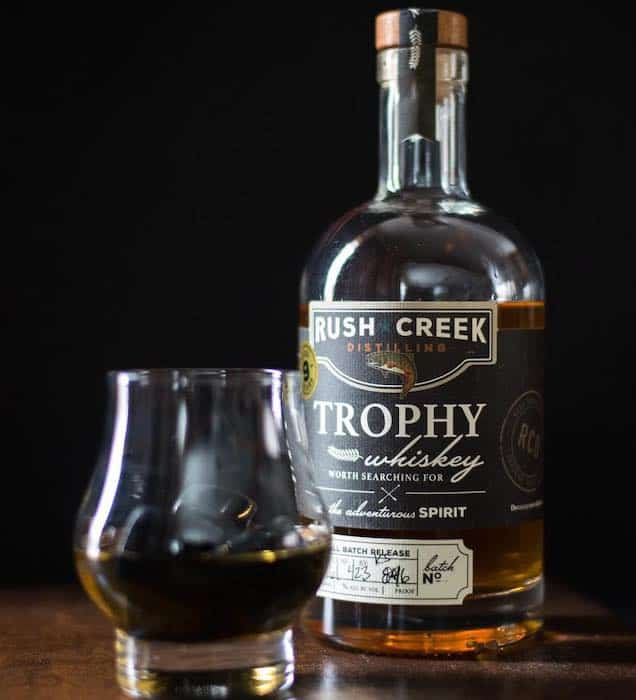 This whiskey is kind of a mess of movie theater concessions stand offerings. The nose has no real redeeming qualities and the taste, while not as unpleasant, is jumbled and dysfunctional. It comes across as underaged, but there may be no way to redeem this juice. Hopefully as they move toward in house distillation and aging it will allow them to better showcase the natural resources of the Rush Creek area. Until then, I’d take a pass on their whiskeys.