Editor’s Note: This whiskey was provided to us as a review sample by The Covered Bridges Whiskey Co. This in no way, per our editorial policies, influenced the final outcome of this review. It should also be noted that by clicking the buy link towards the bottom of this review our site receives a small referral payment which helps to support, but not influence, our editorial and other costs.

Whiskey is usually much more than just whiskey; often, the beverage comes along with a loaded, complex history. In the case of  The Covered Bridges Whiskey Company, each bottle pays homage to the covered bridges built during the early days of America’s infrastructure. These scenic, wooden, tunnel-like bridges were common during the 1800s and built near mills to improve infrastructure for the transportation of goods. Often times, these goods included whiskey.

While this mash bill is less of a “recipe” and more based simply upon what grains were available at the time, it has proven to be a nostalgic taste worth resurrecting. Ruddell’s Mill Kentucky Straight Rye is derived from a high rye mash bill and just a touch of malted barley. This type of whiskey today would be considered a “high rye,” though during the time of covered bridges, it was the common, go-to ingredient.

The whiskey is named after one of Kentucky’s first covered bridges, Ruddell’s Mill, which was built in 1861 at the site of Isaac Ruddell’s grist mill along Stoner Creek and the South Fork Licking River. This mill was Bourbon County’s first industrial district. After the bridge was built, it functioned to provide easy access to both sides of Stoner Creek until 1964 when it was destroyed by arson.

The Covered Bridges Whiskey Co.’s Ruddell’s Mill Rye is a small batch whiskey with a batch number on each label. At 94.4 proof, it is non-chill filtered and comes in bottles of 750 ml. I don’t know about you, but learning about the heritage behind this whiskey makes it even more exciting to drink. To learn more, check out The Covered Bridge Society’s website. 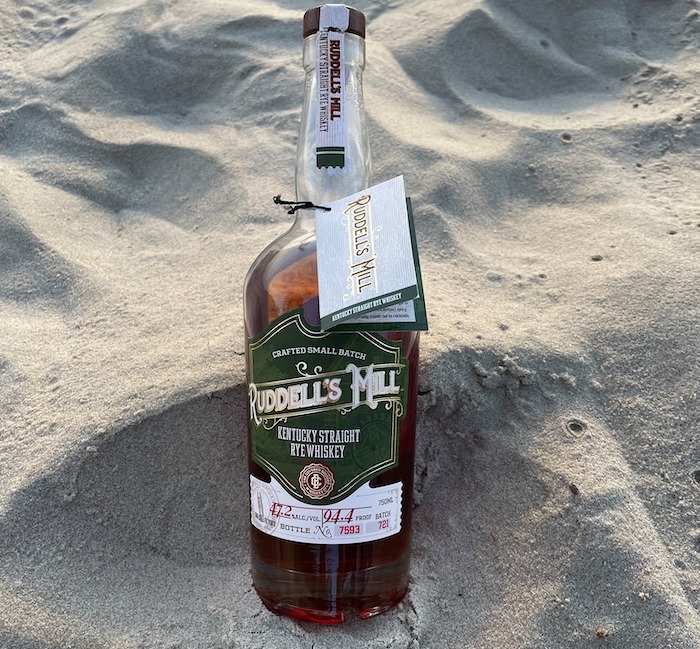 Nose: Very light and buoyant. Upon smelling this I picture honeydew melon, vanilla, notes of nutmeg or cinnamon, old wood and a mellow, fading summer’s day.

Palate: Spicy. I was not expecting this taste from its smell. Dried fruits, caramel, and aging wood. Still tingling on my lips after the last sip.

While I really enjoyed this one, the flavor went away a little too quickly. I think this whiskey would make a great gift for a friend or addition to your personal collection. I am very pleased to have this one and will reach for it when I want something that quenches my thirst, but is not too fancy.