Whiskey Review Round Up: Milam & Greene

Editor’s Note: These whiskeys were provided to us as review samples by Provision Spirits. This in no way, per our editorial policies, influenced the final outcome of this review.

The first thing I noticed about Milam & Greene was the impressive packaging from the labels to the bottle shape to the weight of the glass. It’s not often I find a whiskey bottle that is so unique. I think that’s usually a good indicator of a fine spirit.

Secondly, the thing I loved after researching Milam & Greene was that it was started in Texas from a partnership of two women; Marsha Milam and Heather Greene. Milam and Greene is owned by Provision Spirits. “Provision Spirits believes brilliance in independent whiskey-making requires the integration of the highest quality distilling on-site, aging, blending, batching, proofing, sourcing, finishing and bottling practices to achieve complexity and balance to please the most demanding palate.” — Milam and Greene story. Everything happening under one roof also adds to the uniqueness of this brand.

To call a bourbon “straight whiskey” it means that it has to be at least two years old. Milam and Greene Triple Cask Bourbon Whiskey is just two years old, meeting the minimum aging requirement. This 2 year old whiskey, with a mash bill of 70% Texas corn, 22% Pacific Northwest malted rye from Oregon & Washington, 8% Wyoming barley and a proprietary yeast recipe from Kentucky and Texas, is just part of the blend. It also gets mixed with a Tennessee whiskey of about 10-11 years old and a 3-4 year old Tennessee whiskey. Each of these whiskeys adds its own flavors to the blend.

In contrast to the Milam and Greene Triple Cask Bourbon the Straight Rye Whiskey Finished In Port Casks comes to age in Texas from Indiana. It gets blended on site and then aged in ex-port wine casks from Portugal. Under the Texan sun the rate of aging can vary by barrel so there is a process of constant monitoring to get just the right maturation. 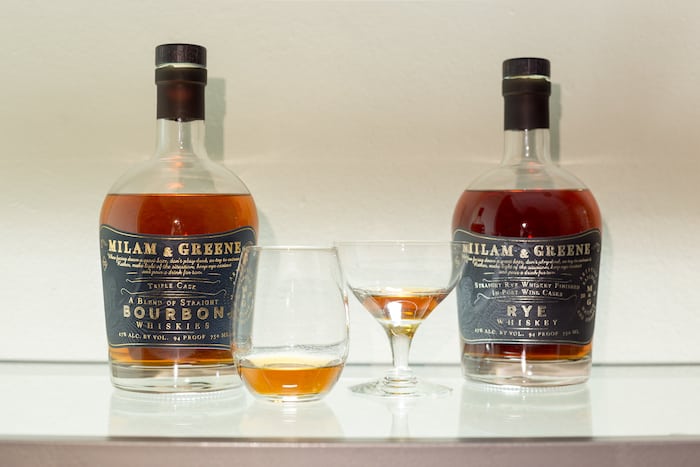 Nose: It smells of a gently, crisp apple peel with hints of vanilla.

Palate: This bourbon has very simple flavors that are blown out without a touch of water. With a dash of water it becomes very smooth and sweet like caramel. It finishes with apple flavor.

Final Thoughts: There is a mildly smokey flavor with water added but it fades into a sweet, crisp, fruity finish. It is smooth and very sippable.

Nose: It is quite weird but there is almost no smell but a distant pine forest.

Palate: This Rye opens very buttery with cinnamon heat but has a hot and peppery finish.

Final Thoughts: With such a subtle nose the taste is very surprising. It has a very flavorful profile that you wouldn’t guess by smelling it. It’s spicy and hot yet very drinkable even without water which is different than the bourbon. With both the bourbon and the rye they are good for sipping.