As we all know, Japanese whisky is so hot right now. Yet the combination of rarity, language barrier, and spotty U.S. distribution means Japanese distilleries beyond the big two of Nikka and Suntory remain something of a mystery to American drinkers. So I was particularly excited by the chance to get to know one of the lesser-known Japanese whisky brands, Kurayoshi.

Kurayoshi Malt Whisky is made at the Matsui Shuzou production facility in the Tottori Prefecture, northwest of Kyoto, which was founded in 1910. In addition to whisky, Matsui Shuzou also brews sake and distills shochu, a spirit made from rice, barley, sweet potato, or other starchy ingredients inoculated with koji, the same mold used in sake production.

According to Caskers, Kurayoshi Pure Malt is made by combining sourced malt whisky from Scotland with Japanese malt whisky, then maturing and proofing the final blend in Japan. It’s unclear whether these releases follow the same pattern. It often surprises people to learn that importing whisky from other nations, blending it, and bottling it as Japanese whisky is very much allowed in Japan, although not many distilleries go out of their way to declare it to the general public.

Marcin Miller, business partner in The Kyoto Distillery, told the Spirits Business in March 2018, “people are bringing Canadian whisky into Japan, bottling it as 18-year-old Japanese whisky, and making a killing.” In the same story, Dave Broom says the issue of imports has the potential to damage the reputation of Japanese whisky on the global market. “This needs to be resolved now,” he says. “The good thing is that the majors realize it’s a problem, and my understanding is that talks are under way to try to create rules. It has been far too loose, and run on a gentleman’s agreement.” Serge over at Whisky Fun also wrings his hands about the alleged Scottish origins of Kurayoshi. Again, it’s hard to know for sure what’s in these bottles, since their contents are not fully described on their importer’s website or the bottle’s packaging.

In this case, Kurayoshi places great importance on the pure, clean water of Tottori Prefecture, much of which is designated as a wilderness preserve. They say its low mineral content and high purity makes it ideal for proofing malt whisky. I’m excited to taste these four different examples of Kurayoshi’s final products to find out for myself. 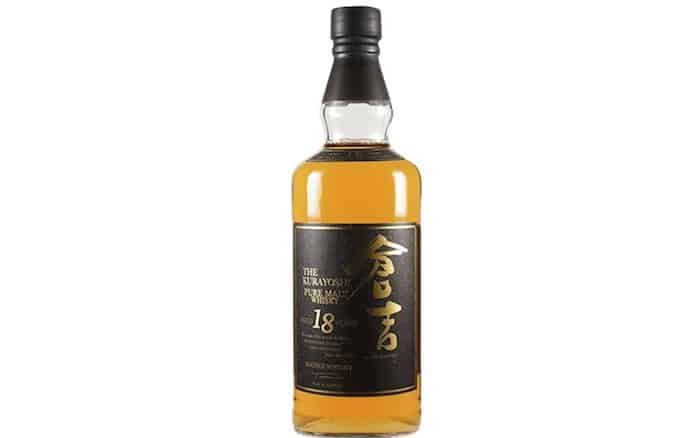 Appearance: Chardonnay, with a viscous texture.

Nose: Very nutty, with Spanish peanut, gasoline, caramel, Payday bar, musky bosc pear, cooked orange, mushroom, and a white truffle topnote. Quite earthy and savory, without much in the way of fruit.

Palate: Dense and compact, with white chocolate, peanut brittle, lemon peel, sherry, and a cocoa-like bitterness in the finish as well as some slightly sappy green notes. It’s much less sweet and fruity than the regular eight-year-old.

Final Thoughts & Score: Some sherried whiskies really pick up nutty notes, and this is definitely a nut job. It’s nice and savory, but feels a little flat somehow. (3/5 points)

Nose: Reminiscent of the eight-year-old but with some extra floral, waxy components. I get candle wax, dried rose petals, and a hefty whack of fruit – melon, kiwi, tangerine juice, even cucumber. There’s lots of malt, too – biscuit, porridge, oatcake. Weighty and bottom-heavy, with water, I notice some tails.

Palate: Rich and malty, with big and somewhat raw grain-forward character. The flavor is broad across the palate, with a sugary grain sweetness throughout. Almost beery, with a medicinal herb bitterness and slaty minerality in the finish. Water brings out even more sweetness and graininess. The persistent finish leaves you with an IPA-like sensation.

Final Thoughts & Score: The 12-year-old feels a little immature somehow, with some oddly raw grain taste, but it’s nice just the same – as long as I remind myself that balanced doesn’t necessarily mean boring. The tailsy note is off-putting, however. (3/5 points)

Appearance: Almost indistinguishable from the 12-year-old

Palate: A sweet note kicks things off before pivoting towards a mysteriously high-toned spice. (Allspice? White pepper?) Fruitwise, there’s melon and lime, but the grain is much more integrated and harmonious than the younger offerings. A very long finish has caramel and chocolate notes, plus lingering flavors of melon and papaya at the bitter end. Nicely matured.

Final Thoughts & Score: This is extremely yummy, although lighter in body and palate than many seasoned single malt drinkers might expect from an 18-year-old. It’s very pretty, though, with an appreciable elegance. (4.5/5 points)