While there are plenty of up-and-coming distilleries (and older ones at that) going to great lengths to make their whiskey local, old-fashioned, and environmentally conscious, there are few I’ve heard of that go to such great lengths as Iron Fish Distillery.

Located near a community in northwestern Michigan called Thompsonville, the owners – Sarah Anderson, Richard Anderson, Heidi Bolger, and David Wallace (two sisters and their spouses) – vacationed nearby in their childhood and were so taken with the area that they bought a 120-acre farm in 2011 without a clear idea of what to do with it, according to MLive.com.

That is, until 2013, when they took a trip to Scotland and visited several distilleries there, according to their website, drawing particular inspiration from an unnamed distillery on Islay.

What followed was their project to create Michigan’s first distillery located on its own fully functional farm dedicated solely to field-to-glass spirits-making. The farm was originally established in the 1890s, and had been fallow for about 15 years before this.

Not only the company growing its own grains on the farm, Iron Fish is also milling, mashing and fermenting those grains onsite and is working with Michigan Tech to develop its own yeast strain that will propagated onsite, Richard Anderson told Northern Express.

The distillery is already set to open an expansion this summer. It’s also netted a $250,000 federal grant to help produce some of their estate spirits.

Although Iron Fish has already produced vodka, gin, and rum using its own ingredients, the whiskey is still aging and won’t be out for a couple of years, since the distillery only opened in 2016.

While its own whiskey ages, Iron Fish has been sourcing spicy bourbon and looking for interesting ways to age it. That series of bourbons includes using port casks to age high-rye bourbon to make the creatively-named “Bourbon Whiskey Finished in Tawny Port Casks.” In another case, Iron Fish looked closer to home in procuring maple syrup barrels to produce their “Bourbon Whiskey Finished in Maple Syrup Barrels.”

Although specific details of the production of these whiskies are sparse, both are 86 proof and come in the usual 750-mL bottle. For now, they are only available in Michigan (with prices not listed on their website or in press releases) with other parts of the Midwest coming soon. 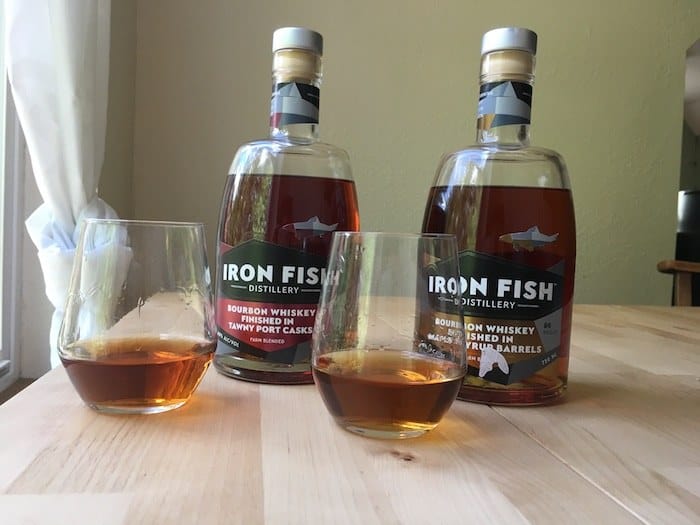 Appearance: Looks a bit red on the redder side in the bottle, but it becomes pretty average amber when poured in a glass.

Nose: The first whiff is bright, sweet, and acidic, dominated by vanilla with orange and a touch of fresh pineapple. It then settles into a mellower caramel with good doses of oak, plum, and raisin, as well as bit of apple and nutmeg adding complexity to the overall aroma.

Palate: The first sip sidles onto the tongue like gentle caramel – sweet but still restrained with a bit of spice – with a bit of prune and raisin in the background. The dried fruit flavors gradually build and take on notes of pepper and cloves, for a moment catching a balance not so dissimilar to a fortified wine like port until the spices build into the dominant flavors that tingle throughout the mouth. Swallowing sends a quick wave of clove and raisin throughout the back of the mouth until that eases into a thick caramel flavor, this one much heavier and richer than the opening flavor. That lingers in the mouth for a couple minutes, punctuated by small bursts of clove-like tingles.

Appearance: Relatively typical-looking amber color in the glass, just a tad toward the browner side of whiskey.

Nose: As one might expect, the basis of this bouquet is the sweet, rich aroma of maple syrup. However, that sweetness doesn’t dominate the nose, as it’s tempered by strong notes of oak and cinnamon – adding a spicy and earthy dimension – with a touch of tangerine adding a bit of tartness.

Palate: The first sip is rich, sweet, and fruity, reminiscent for me of caramel spread onto a red apple. Gradually, cinnamon and nutmeg work their way into the flavor and building into a moderately harsh roar on the tongue, while simultaneously shifting the sweet side of things closer to maple syrup or molasses. Swallowing sends a blast of cinnamon toward the top of the mouth while tingles slowly make their way of the sides. That gives way to a rich, sweet, and smoky molasses flavor that coats the tongue, with slight tingle throughout the mouth.

While this isn’t the whiskey that Iron Fish Distillery plans to make for its eventual mainstays – and therefore it seems a little premature to judge – I find their taste in the whiskey that they have put to market is exquisite. Both of these whiskies had an excellent blend and balance of flavors and remarkable symmetry between the nose and the palate. I was particularly nervous about mixing maple syrup with whiskey, but the result was especially impressive. I can’t wait to taste what Iron Fish does with their own whiskey.