From the Scorpion Mezcal master distiller, Douglas French, comes a trio of whiskies from the Oaxacan region of Mexico. Sierra Norte Native Corn Whiskey has released three expressions using three varietals of Oaxacan corn; yellow, white, and black. The corn is grown by traditional farmers striving to keep the ancestral corn and culture alive in a time when GMO corn is a cash crop.

Oaxacan corn comes in practically every color, and each adds its own distinct flavor and nuance to a spirit’s profile. It is Douglas French’s vision to have a Sierra Norte Native Corn Whiskey in every color of Oaxaca’s traditional heirloom corn. While distribution is limited around the United States, Caballeros, Inc. hopes to increase it in order to continue promoting economic stability in Oaxaca.

Let’s take a look at the current expressions Sierra Norte Native Corn Whiskey has in their line up. 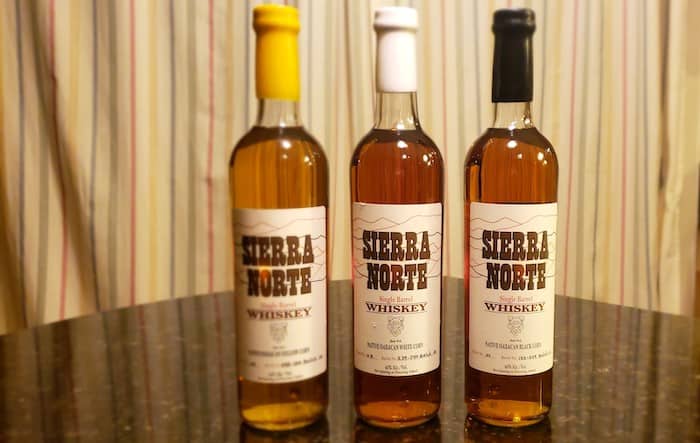 Nose: Not as pungent on the nose as the Sierra Norte White, but still yeasty. Reminds me of a loaf of Wonderbread.

Palate: Behind the veil of tar and leather is a burst of cinnamon. Abundant with rose petals, which is a nice surprise to pick up. Orange and grapefruit peel finish it off, but as soon as you notice it it’s gone in a flash.

Nose: Strong yeasty funk you have to nose through for a good while in order to find anything besides smelly hiking boots that have spent time backpacking through the Sierra. Cherry blossom and apple are the main notes apart from the funk. A faint vinegar or kombucha note wafts through steadily. In the middle, there’s a bit of brown sugar and nutmeg. Finishing off the nose is orange peel and bright lemon.

Palate: Like some blue corn whiskies, the mouthfeel on this whiskey is very soft. Tastes like young oak and old saddle leather a cowboy has been riding off into the sunsets with his trusty horse. Overall, the finish is too short and then you’re just with a grassy aftertaste coating your mouth.

Nose: Spoiled fruit and yeast are nauseatingly at the forefront. Kind of reminds me of painting my nails while drinking cheap sweet champagne. Cherry stands out along with oranges and decayed forest floor.

Palate: It’s got a funky upfront taste that quickly turns into a sharp bitterness. Between that funk and bitterness is a brown sugar, almost molasses, taste. This one has a touch of salinity. As for the finish, corrugated cardboard comes to mind.

I spent a lot of time with the Sierra Norte whiskies to make sure I was giving a fair assessment. The nose on all of the whiskies is frankly off-putting; so much so, that I could barely stomach to take a sip and ingest. Aged only 10 months in French oak barrels, the whiskies are just simply not mature enough. Because I love blue corn whiskies, I was initially excited to give these whiskies a go, however, something is amiss. While Mexican whiskey is new to the market, there are some hurdles to get over.

Eventually, I can see it emerging from the shadows of the mezcal and tequila markets – it’s just going to take some more time perfecting a solid whiskey.