Editor’s Note: These whiskies were provided to us as review samples by Reservoir Distillery. This in no way, per our editorial policies, influenced the final outcome of this review.

I like ingredients. For example, when making dinner for myself, I’ll often eat what I’m making before it’s made. Not, like, raw meat or dry rice, because gross. But I tend to be more of a snacker than someone who doesn’t eat what they’re eating until it’s time to eat. I’ve had my hand batted away from grated cheese going into enchiladas, or I sneak spoonfuls from the pot when it’s almost ready but not yet on a serving platter.

Some call this impatience. I call it quality control.

Richmond, Virginia-based Reservoir Distillery was founded in 2008. Everything they make is crafted, aged, and bottled by them. They only use open-top fermentation in a process that can take between 6-11 days, and pot stills instead of column stills. They are also really focused on barrel controls, specializing in quarter-casks aging. Some barrels are crafted from hand picked Virginia trees, and it is noted as well they have a custom alligator char and that each cask is only used once for whiskey maturation.

Reservoir, furthermore, is unusual in that all their whiskies are single-grain mash bills. In other words, their wheat whiskey is 100 percent wheat; the rye, 100 percent rye; and the bourbon, 100 percent corn. I like that – it’s one thing. Keep it simple. If you collect all three, you can make whatever kind of mash bill you want, if you’re a blending type. 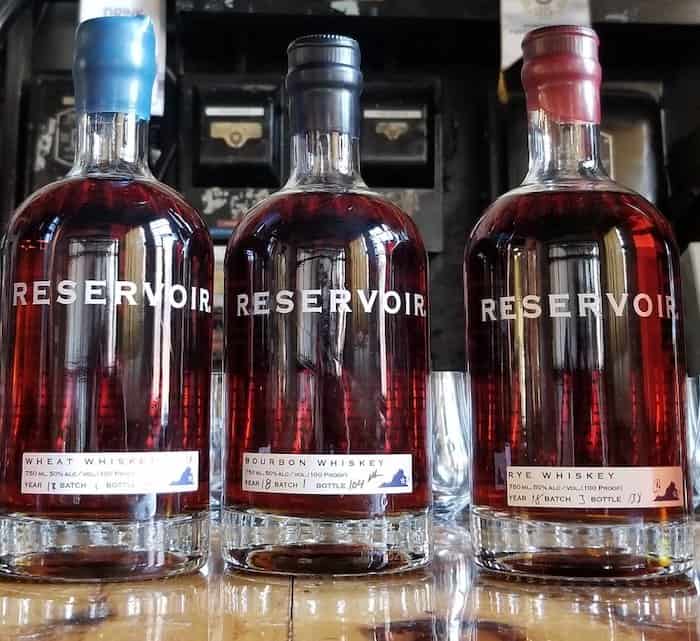 Palate: It starts smooth and then finishes a little peppery, a touch hot. My tasting colleague wanted to pair it with Indian food, something aromatic and spicy. (I also thought you could pair it with cheese: I think most whiskies and cheese go together about as well as wine and cheese do.) This is well rounded: Not harsh at all. This is really pleasing.

Appearance: Tea steeped a short time: a little orangey; a duller than its wheated sibling.

Palate: Also sweet! So sweet. Aggressively sweet. It’s like they made a whiskey candy and then melted it and poured it into my glass. It’s not entirely unappetizing, and there is some clarity to it, but did I mention it was sweet? My companion said, “I’d drink this, but I don’t like it as much as the wheat.” It is less well-rounded and not as much of a comprehensive experience. The wheat whiskey took us on a ride. This one sort of…carpooled.

Appearance: Like a glowing gold or copper. It lands somewhere between the wheat and the corn. Less shine to it than the wheat, but more than the bourbon.

Nose: The bourbon was candy-sweet and this one is more sugary sweet. More pleasingly, naturally smelling sweet. Caramel, a perfectly toasted marshmallow with no char or white spots. I felt like I was in a library, surrounded by shelves made of brown sugar.

Palate: This is a very, very nice rye. It isn’t overly spicy or chewy; in fact, it’s kind of mellow. Cherry on the finish. I’d sip this neat or on ice but not in a drink, because I’d want to keep tasting this rye. Solid!