Whiskey Review Round Up: Penelope Bourbon

Editor’s Note: These whiskeys were provided to us as review samples by Penelope Bourbon. This in no way, per our editorial policies, influenced the final outcome of this review.

Penelope Bourbon, is an up and coming brand in the world of craft spirits, founded by childhood friends, Mike Paladini, and Danny Polise. The entrepreneurial duo out of Basking Ridge, New Jersey sought to bring a bourbon to the market that could unite whiskey aficionados and casual sippers alike. Both soon to be fathers, Mike dedicated the brand to his daughter, Penelope.

Like many newcomers, Penelope’s mash bill is sourced by MGP in Lawrenceburg, Indiana. Built on a  “four grain” recipe, which can be broken into 3 mash bills of: wheat, and rye grain mashes, aged separately from the corn and barley mash, and ultimately blended. An honest “24 Month” age statement is provided.  Understandably young, and in line with many up and coming companies and distilleries.

The lineup currently consists of the flagship 80 proof batch, marketed as light, and under 100 calories per arbitrary pour, as well as a barrel strength release, coming in at 116.6 proof. Seems like the Penelope team are feeling out their market, and offering a low and high proof expression of the same recipe is a clever and simple way of testing it with the goal of versatility:  something light for the diet conscious, perhaps as a mixer, and something for the connoisseurs to dip their noses and palates into. 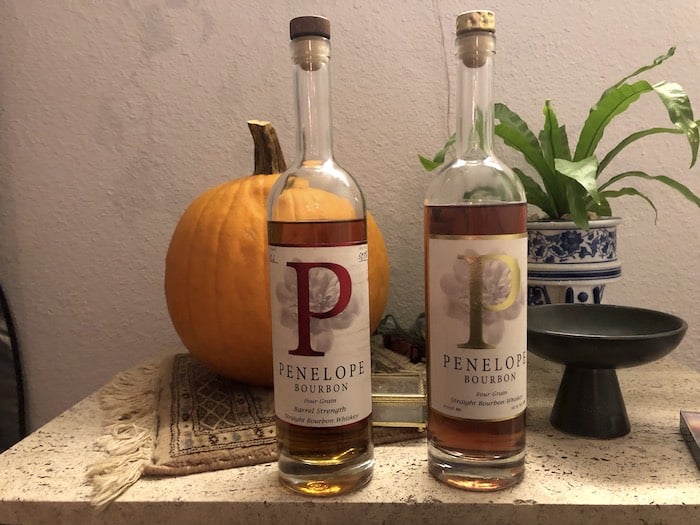 Final Thoughts: Light and inoffensive as advertised, it takes a bit of effort to pick up notes here. I think it would serve well as something to share with inexperienced friends, or in a cocktail. Curious how this would fair with a bit more age. It could serve as a worthy alternative to shelf mainstays at that price point.

Nose: Honey and vanilla magnified, as well as clove, dill, and milk chocolate.

Final Thoughts: A bit more going on here thanks to the hefty ABV boost. The youth is apparent, but rounded out with a few drops of water. It’s a fairly complex and enjoyable pour, albeit a bit thin for a barrel strength non-chill filtered whiskey.