Editor’s Note: These whiskeys were provided to us as review samples by Diageo. This in no way, per our editorial policies, influenced the final outcome of this review.

The Whiskey Wash has been following the Orphan Barrel experimental series with oak, Rhetoric, since its debut in 2014. As a collective whole, Rhetoric earns an A+ as it exemplifies the nuanced importance time and oak have in the whiskey making process. Current and future distilleries should look at the Rhetoric series for inspiration to hone their own craft.

Starting with a 20-year-old bourbon at 90 proof, the Rhetoric collection moves on up to a 25-year-old bourbon at 91 proof. You would think the tiny discrepancies in proof wouldn’t have that much of an impact, but it really does even with the Rhetoric 21-, 22-, 23-, and 24-year-old going up in .10% ABV increments. With the Rhetoric series from Orphan Barrel, they are testing the aging limits. While the majority of bourbons on the market are typically young, there are many theories on the perfect age for bourbon; some believe bourbon shouldn’t be aged past 15 years.

I have previously reviewed the Rhetoric 23 and 24 side by side. Below you will see my tasting journey of the Rhetoric series from its initial 20-year-old whiskey to the final, recently released 25-year-old. Individually, the whiskies each stand out. As a collection, tasting all of them together I found surprising and necessary to fully appreciate the differences. 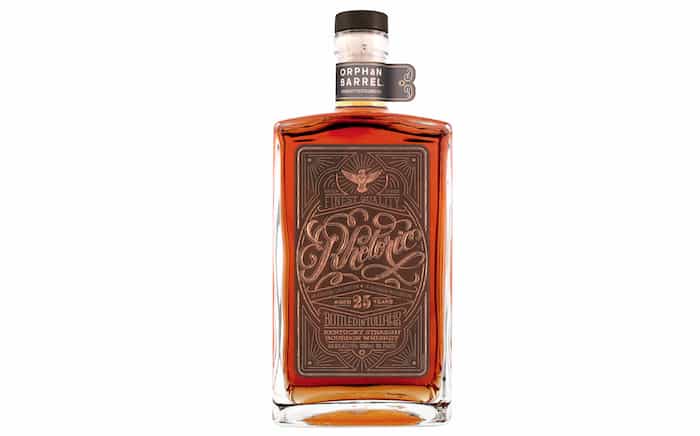 The 25 year old Orphan Barrel Rhetoric, the oldest in the series. (image via Diageo)

Nose: Right off the bat, I get tangy fresh banana that needs a day to ripen. There is a lot of citrus peel; mostly lemon peel, but a bit of orange peel too. The sweet smell of butterscotch and toffee give it the right balance. Oddly, the end note is Johnson & Johnson baby powder.

Palate: The mouthfeel is oily, and it comes off hot; not high proof hot, instead more like a rye. There is oak, but it keeps to a minimum. I get tons of bright green apple, mixed with an old bitty’s perfume. The nose seems deceiving because on the palate I get a bitterness comparable to citrus pith, amaro, and strong black tea, which all makes the dram a little astringent.

Final Thoughts: Ranked number one for me out the series. I was surprised the oak was not entirely aversive. There is a lot of complexity, but overall it is balanced. The palate of the Rhetoric 20 Year Old has strong, specific notes, but all together it’s a pretty tame whiskey where everything works.

Nose: I get strong baby powder and green apple. The banana not seems to have ripened compared to the 20-year-old, and with some cereal notes the nose takes on banana bread. Citrus zest and rosehip fill out the back end.

Palate: The mouthfeel is oily, and it drinks hot and spicy like a rye. Reminiscent of perfume. There is so much rose and oak that I feel like I drank a bouquet. On the finish is straw and sugar snap peas. A faint note of clove stays on the breath.

Final Thoughts: Ranked number three for me out of the series. The Rhetoric 21 Year Old is light and isn’t overpowered by the presence of oak, but there is more oak than the 20-year-old. It’s complex, but it drinks well.

Nose: The oak is really pronounced in this one. I still get baby powder and banana bread. The sweetness on the nose is butterscotch and toffee with faint cinnamon. There is a bit of rose petal with cardamom too.

Palate: It mainly tastes like oak and roses. It’s sips like high octane, compared to the others. There’s cinnamon and nutmeg, but that’s not where I am getting the heat from. Fresh garden mint, granny smith apple, melon, and stone fruit add in some layers. Overall, it is really bitter and the flavors don’t seem to mesh well.

Final Thoughts: Ranked number six for me out of the series. Disappointing for the lack of balance. The oak flavor is creeping up in intensity, and I can only see the Orphan Barrel Rhetoric series getting overtaken by oak from here on out. The harshest of them all to drink with a bitterness that leaves your mouth puckering dry.

Nose: It comes off as a high octane whiskey, and it is reminiscent of lemon nail polish remover. Baby powder is still ever present just like the first time I reviewed it. Pungent over-ripened banana and cinnamon stand out. Similar to the others, there is prominent green apple, rosehip, and mint notes. I get a strong amount of black tea.

Palate: Strong with oak, but a nice a reprieve from the 22-year-old. While this one is more tannic, it comes off more grassy and straw-like than any of the other whiskies in the series. Cereal notes come through, and there is a bit of cinnamon and nutmeg in the middle. Orange and lemon citrus pop out with mint for the finish.

Final Thoughts: Ranked number four for me out of the series. In the whole series, the 23-year-old is pretty neutral. Not the highlight of the collection by any means, as individually it is like chewing on a toothpick. Better than the 22-year-old, so I am curious how the Rhetoric rollercoaster continues.

Nose: The 24-year-old is reminiscent of an arnold palmer on the nose, which perfectly ties in that black tea and lemon peel I was getting from the other whiskies. Heavy in baking spices like cinnamon, nutmeg, and clove. The overall sweet note is butterscotch. Apart from the green apple, honeydew or cantaloupe rind sticks out. Unlike fresh garden mint, there is a touch of spearmint.

Palate: Overwhelming notes of acetone, oak, and rose petal sit at the forefront. There is only a slight amount of sweetness on the palate. Green apple lingers in the middle. Grass and hay muddle around the mouthfeel. There is a slight bit of mint towards the end, but the finish is hot with baking spices, clove, and Sharpie permanent marker.

Final Thoughts: Ranked number five for me out of the series. The nose is very deceiving, and is more preferable than the way this one sips. Mediocre like the 23-year-old, but it deserves its place in this collection. Sitting down all at once to compare them really shows the consistencies, which has been the strength of the Orphan Barrel Rhetoric series.

Nose: Mint and citrus peel (orange and lemon) are at the forefront. The baby powder is not quite as strong as it is in the others. Faint acetone peeks through strong butterscotch notes. Tea and rose petal round out the backend.

Palate: Oak is the first thing that hits the tongue, but only for a moment. Rather than an acrid and dry mouthfeel, the 25-year-old is velvety and soft. Only slightly hot with pronounced clove, a touch of nutmeg, and a small amount of cardamom. I don’t just get green apple, but pear and wine grapes as well. Lemon peel mixes in with mandarin slices.

Final Thoughts: Ranked number two for me out of the series. Interesting to see how the end caps of the Orphan Barrel Rhetoric collection were best in show. The 25-year-old was a strong finish and a high note compared to the 22-, 23-, and 24-year-old. I was shocked to find how different it was, in a good way, because I was pretty sure it was downhill from the 22-year-old.