Editor’s Note: These whiskies were provided to us as review samples by Jack Daniel’s. This in no way, per our editorial policies, influenced the final outcome of this review.

There are few secrets when it comes to Jack Daniel’s Tennessee Whiskey. They are open and honest about their recipe and production process, probably because they are an iconic and irreplaceable brand. They are the one of the highest producing and also one of the oldest registered distilleries in the United States. With that comes a confidence in tradition and a worldwide following that allows plenty of wiggle room for creativity.

There are some fantastic resources that explain every step of how Jack Daniel’s Old No. 7 is made. The spirit used in the Tennessee Tasters’ Selection is the same as the Old No. 7, but has a special twist and a custom label to entice the daily Jack drinker or curious whiskey lover. The first one is an intentional adjustment to the flavor profile that uses a secondary barrel finish with hickory staves. Hickory, as most know, produces a very distinct smoke that the typical white oak does not have. This will likely be a great whiskey for BBQ lovers.

The second (of a total of three) is a bottling that capitalizes on Jack Daniel’s tendency to not rotate their barrels in their rick houses. A note on the bottle states the average weight of the barrels selected was 295 lbs, which equates to an average angel’s share of almost half the barrel. A huge concentration in flavor and change in barrel-spirit interaction creates a very exciting special release.

The third of these limited edition Jack Daniel’s bottles (not reviewed here) uses ex-wine barrels. All three are hand selected by the highly skilled master tasters (and distillers) at Jack Daniel’s. When the folks who blend the whiskey every day get a chance to be creative, special things happen. They know they want to create a unique version of an already reputable whiskey; something well accomplished with this new line from Jack Daniel’s. 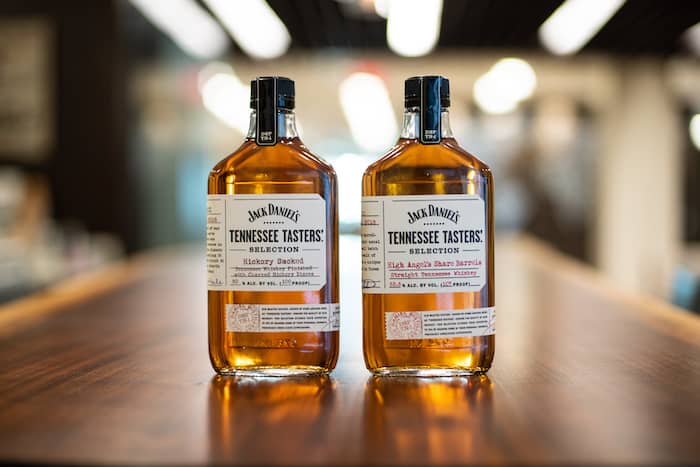 Nose: The hickory is immediately noticeable, a rare occasion for whiskies of similar styles in my opinion. Usually you search for the particle smoke flavor, here it is easily found, especially if compared to the original Old No. 7. Back notes of caramel, vanilla, and apples.

Palate: You’re immediately brought to that campfire you had in college when someone passed around a bottle Jack. There is a non-cloying sweetness not found in your normal Jack Daniel’s. Sweet hickory smoke, as the name has implied, is prevalent and well represented. The other flavors are still existent – oak, vanilla, caramel, red fruit, honey – but they are nuanced. After a few sips you’re accustomed to the hickory flavor, and it feels comfortable to drink.

Final Thoughts: You get what you expect out of this whiskey. It is Jack Daniel’s, with a bit of hickory. If you enjoy pairing like with like, such as a cigar and peaty scotch, then drink this while having a BBQ or sitting around a fire. It brings new perspective on Jack that I definitely don’t mind, but it makes it a bit more one-dimensional. All together, their goal has been accomplished in the flavor and the aroma, so there’s no false advertising here!

Nose: Hits dramatically from a distance with a pleasant caramel apple and honey. Extremely inviting until you get too close, when the 53.5% hits your nose!

Palate: I tasted the oak before it even hit my mouth. There is an initial and expected burn, which dissipates in a satisfying way. Sweet and oaky, but big and red as well. A few drops of water bring out the sour mash aspect and helps show more vanilla and caramel. The oak influence is always prevalent, but once you move past the burn and sweetness, there are some very fun nuances. Extremely well balanced.

Final Thoughts: Highly inviting at the initial smell and taste. Also, very interesting for a Jack Daniels bottling, and something I really enjoyed. The sweetness is much better balanced here than in the typical Jack. Instead of a sweet piece of candy, it feels like an artfully crafted savory dessert. This expression fully shows the quality behind Jack Daniel’s and their heritage in whiskey making. I honestly wish all Jack Daniel’s tasted this good!