Whiskey Review Round Up: Hotel Tango Straight Bourbon and Rye

Editor’s Note: These whiskeys were provided to us as review samples by Hotel Tango. This in no way, per our editorial policies, influenced the final outcome of this review.

The backstory to Hotel Tango is one well-worth telling. It starts with a young man’s desire to serve his country — and ends with the first combat-disabled, veteran-owned distillery in the U.S.

Like many others, Travis Barnes was inspired to put his undergrad education on hold to enlist in the military following the terrorist attacks of September 11, 2001. He served as a U.S. Marine for three tours in Operation Iraqi Freedom. According to Hotel Tango press materials, Barnes ultimately “[rose] to the rank of Sergeant and receive[d] multiple combat action medals and citations.”

After being hit with multiple IEDs, Barnes was diagnosed with a Traumatic Brain Injury and Post-Traumatic Stress Disorder. He was honorably discharged, re-joined civilian life, and graduated from law school where he met his future wife Hilary. Together, they began making whiskey with a homemade still after getting married in 2012.

Respect for and execution of principles critically important in the military — from precision and rigor, to discipline, excellence and community — were illuminated for Barnes during his time in service. These qualities helped inform and have been infused into Hotel Tango, which the Barnes’ founded in 2014 and launched with the support of several friends in downtown Indianapolis. Notably, it was Indiana’s first since Prohibition.

As a practice, Hotel Tango is focused on producing quality spirits and also to giving back — supporting local businesses, hiring other veterans and supplying commissaries around the country. It’s an ethos impossible to not rally behind. And, they’ve been steadily growing — with substantial funding secured earlier this year, a recent rebranding and an announcement of plans to open a second tasting room and expand its retail presence in Indiana.

Hotel Tango, which is a member of the Indiana Distillers Guild, is currently producing nine spirits under the helm of Head Distiller Bob Yates — including vodka, gin, orangecello, a reserve bourbon, and a “ready-to-drink” rye and bourbon. The bourbons appear to have replaced the brand’s previous “Bravo Bourbon.”

Here, we dive into the “ready-to-drink” bourbon and rye. 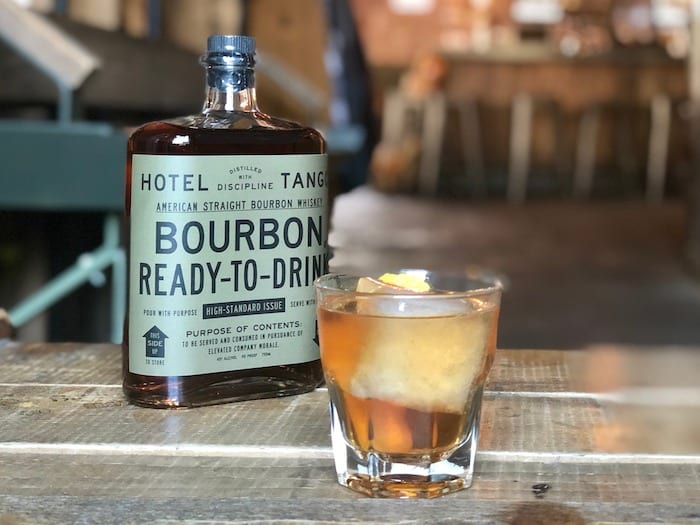 Palate: Zippy and bright, with a flash of spicy pepper at the front at the start that opens up to toffee, brûléed orange, and very subtle baking spices and oak.

Final Thoughts: While sometimes youth can work against whiskey, that couldn’t be further from the truth here. This is a dynamic, well-balanced, easy-to-drink and highly enjoyable bourbon.

Vital Stats: This rye is blended from MGP-sourced barrels (aging time not specified) and bottled at 100 proof. A 750 mL bottle retails for $49.99.

Nose: Bright citrus, herbs and rye grain, with a nondescript freshness about it.

Palate: Warm baking spices, toasted rye bread and a finish that flashes with cinnamon and dissipates to a subtle sweetness reminiscence of melon.

Final Thoughts: Smooth, balanced, versatile and impressive. Approachable for a daily-drinker, but good enough to be considered something special.