Editor’s Note: These whiskeys were provided to us as review samples by Hard Truth Distilling Co. This in no way, per our editorial policies, influenced the final outcome of this review.

When we think of whiskey from Indiana, most of us immediately think of MGP in Lawrenceburg. The truth is, there are just over 25 craft distilleries in the Hoosier state. Hard Truth Distilling Co. popped up on the scene in 2015, when it operated above a pizza place. The distillery is now located on a 325 acre wooded campus in Brown County. At 18,000 square feet, it is Indiana’s largest destination distillery, and uses state-of-the-art Vendome equipment.

Hard Truth originally made cinnamon vodka and toasted coconut rum. The leftover rum barrels play a big part in the maturation process of Hard Truth’s whiskey. Their first-ever whiskey is the Sipes’ Straight Bourbon Whiskey. which is finished in those rum casks. It is named after Henry A. Sipes, the first known distiller in Brown County. The Henry A. Sipes whiskey line was released in 2019. Hard Truth plans to release a rye sometime later in 2021. You can, in the meantime, now enjoy Sipes’ Straight Bourbon Double Oak Smoked Barrel.

The Double Oak Smoked Barrel is a limited edition, but Hard Truth does not specify when it will run out. To make this spirit, Hard Truth selects barrels of aged whiskey and transfers the liquid into custom smoked barrels. They smoke these new barrels with the hardwood from their empty rum casks. This imparts a unique flavor to the whiskey, and you’ll see how that turned out below in my review. 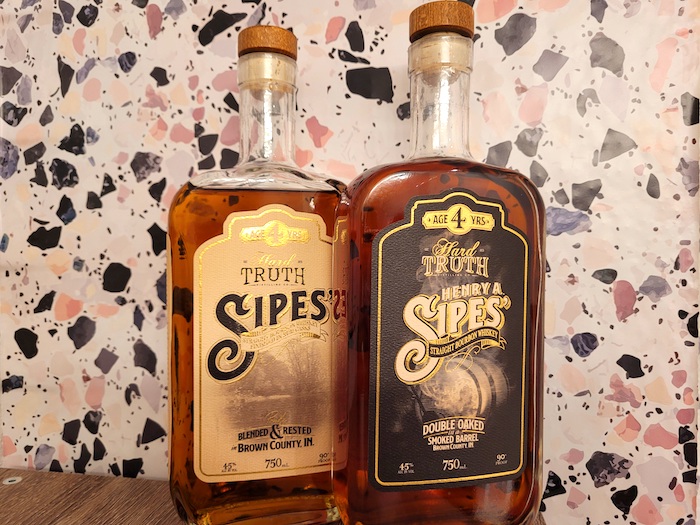 Nose: Let it rest for five minutes before nosing, or else you will get the harsh scent of nail polish remover. After resting, the whiskey reveals a salty nut mixture. Further adding to the nuttiness is the sweetness of pecan pie and marzipan. Caramel lingers in the background, while buttered popcorn springs to the forefront of the nose right before the end. The dram dies off with a touch of musk; a blend of vanilla and dried cedar.

Palate: The mouthfeel is soft yet at the same time feels watered down. It takes a few seconds before the burn really hits you. Suffering through it, caramel and grated ginger finally land on the tongue. There is a fair amount of vanilla in the middle that is fighting with the rum funk. Cinnamon and clove linger on the back end.

Final Thoughts: To sum it up, this is not the finest rum cask finished whiskey on the market. The flavor does not stand out despite the nose offering more. It is great for those who like some rum funk, but otherwise it tastes like Stoli aged in oak.

Nose: Like the Hard Truth Sipes’ Straight Bourbon Whiskey Rum Cask Finish, this Smoked Barrel also has an acetone marker. Ripe banana peel hovers above the dram with bright red apple. Cinnamon and clove add a bit of spiciness. Underneath is a layer of molasses. There is a sour funk that I cannot describe; it is strange but almost familiar at the same time. Dried pine cone and tobacco hang around in the smokiness.

Palate: The mouthfeel is velvety. You can taste the smoke right away. The smoke is reminiscent of tobacco and mesquite.

Final Thoughts: The Double Oaked Smoked Barrel is the better of the two bourbons reviewed. I gave it a neutral rating only because of the harshness that stems from the alcohol itself. It is literally a bottle of liquid smoke with a cinnamon stick and brown sugar mixed in. The taste makes me want more as it is intriguing, but it is hot, so add a cube of ice.

9
Shares
716
Views
Share on FacebookShare on TwitterGet Our Newsletter
Get Jefferson's Ocean at ReserveBar. Shop now!