Glendalough Distillery, just south of Dublin, Ireland, was founded by five friends with a love and passion for the tradition of Irish Whiskey. The monk proudly pictured on Glendalough’s revamped bottle design pays tribute to the monastic settlements that peppered this region during medieval times, but the whisky in the bottle is a far more modern take on such classic liquid. Along with perpetuating the traditions of Irish whiskey distilling, Glendalough adds a twist. Each whiskey in their lineup sees a ‘double barreling,’ or a second period of oak aging in something that’s not the traditional second-use bourbon barrel.

Glendalough produces three whiskies alongside gins and the traditional Irish spirit, poitin. Today, we’ll be looking in to a seven-year, which spends an additional six months in Black Bitts Porter beer barrels from the 7 Lamps Brewery in Dublin and commemorates the seven churches build by the label’s monk; a 13-year, which sees a short stay in finicky Japanese Mizunara barrels; and a three-year called “Double Barrel,” which spends six additional months in first-fill Oloroso Sherry casks. The first two are true Irish single malts, while the Double Barrel is referred to as ‘single grain,’ which alludes to the addition of a second cereal grain beyond the standard malted barley.

The slogan “Stand Apart” appears throughout Glendalough’s marketing materials, online presence, and even directly on the glass bottle. It’s the creativity with which they approach the finishing of their whiskies that makes these products unique, but with experiments in oak becoming a more common thing in the spirits world, it’s no longer the novelty it once was and ultimately comes down to flavor. 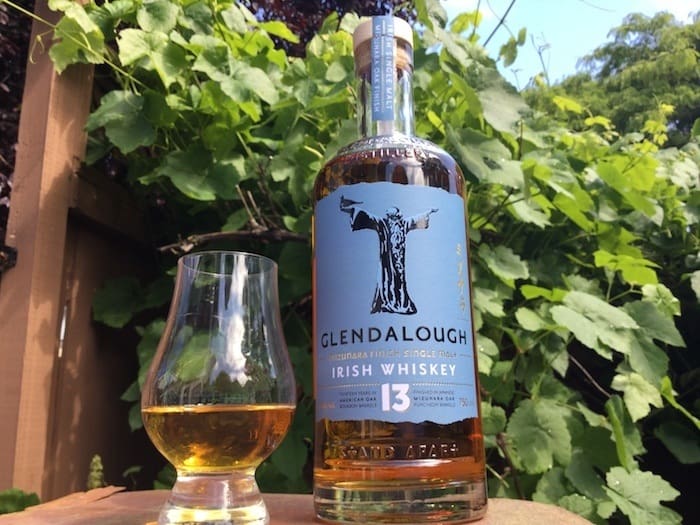 Pours a muted golden hue with solid legs, lacks brightness but still manages to bear a look of intensity. Aroma is complex yet mild. Springtime floral notes jump out first with honeysuckle and elderflower in the lead. There is some fresh sawdust as well as light, tannic fruit. The aroma and appearance whisper more than they scream.

The first sip is full of flavor, however, and brings a schizophrenic melange of tastes to the palate. A sweetness underlies the whole experience while hints of cashew, honey, apricot, and even white chocolate exist here. Heat and viscosity make themselves known here, but neither dominate. A bit messy, but hard to dislike.

This whiskey pours a bit lighter and clearer, although there is some suspended particulate in the liquid. Legs are less resilient as the whiskey beads up on the glass’ interior. Immediately the aroma is off-putting, with a strong middle note that hovers somewhere between sweat and stale beer. There is another strange smell here which is reminiscent of artificial grape flavoring. Despite these oddities, it still plays as whiskey, somehow.

Thankfully only a hint of the grape translates to the taste, but the base liquid strikes me as overall a quite average, and maybe even boring single malt leaning toward a sweeter, grassier profile. I was expecting more roastiness, chocolate quality, and maybe some burnt caramel notes from the porter barrels, but I’m left searching for even the smallest hint. It tastes far better than it smells, bringing forth a true middle-of-the-road Irish Whiskey. What may be an acceptable spirit falls down in the eyes of a drinker expecting unique flavors of experimentation.

The final whiskey pours the brightest, most brilliant, and floatie-free with a glowing straw coloration, a beautiful bounciness, and more strong legs. The aroma is a doozy here, huge booms of spicy wood and fresh-cut grass leap from the glass. Deep inhales show notes of a dank, musty basement, and even a hint of peach skin. It’s a mind-bender for sure, and encourages an almost-immediate sip to see what Mizunara is all about.

The liquid immediately dries out the lips and tongue as it hits them, although astringency seems to work in this liquid. The physical sensation is followed by an evening out of the liquid’s smoother side across the palate, bringing along the flavors of vanilla, honeycomb, and a finish with notes of Christmas spice, Medjool date, and a big, lingering oak presence. It definitely burns and dries at various times making it a slower sipper, which is ok, as it’s a joy to savor and contemplate.

If terroir and ingredients make the base liquids here at all similar, this series is an excellent showcase of how secondary barrel finishing can certainly change things up and alter what began life as a very traditional product. As with any unprecedented experimentation, there are successes, failures, and shoulder-shrugging results. I believe in this trio of beverages, we have one of each.