Editor’s Note: These whiskeys were provided to us as review samples by Boot Hill. This in no way, per our editorial policies, influenced the final outcome of this review. It should also be noted that by clicking the buy link towards the bottom of this review our site receives a small referral payment which helps to support, but not influence, our editorial and other costs.

“Kansas has but one Dodge City, with a broad expanse of territory sufficiently vast for an empire; we have only room for one Dodge City; Dodge, a synonym for all that is wild, reckless, and violent; Hell on the Plains.”

The name Dodge City brings up images of the Old West, or Wild West, of the American frontier. Maybe your first thought when you hear the name is images of Marshal Mat Dillon, from the TV series Gunsmoke. Or maybe you envision Wild West gunslingers, meeting in the street at high noon for a shootout. Well, this is the imagery and legacy that Boot Hill Distillery is hoping to evoke with their whiskeys.

The true history of Dodge City, Kansas, is that of the Wild West gunslingers. Once known as the “wickedest little town in America.” it was often inhabited by and visited by, the most famous gunfighters in American history. Prior to the infamous shootout at the OK Corral, Dodge City was the home of famous lawman Wyatt Earp, who was Marshall of Dodge City from 1876 to 1879. Earp’s good friend, Doc Holliday, was also a resident of the town for part of that time.

Located on the site of the old Boot Hill Cemetery (bodies were moved to a new location in 1878), and in the former Municipal Building which opened on the site in 1929, Boot Hill Distillery takes great pride in their location and history. Owners Roger Kelman and Hayes J. Kelman, father and son, fourth and fifth generation farmers, plant, grow, and harvest all the grain used in their distillery. They state that their spirits are truly “from soil to sip,” and they are one of the few distilleries that can truly claim this. 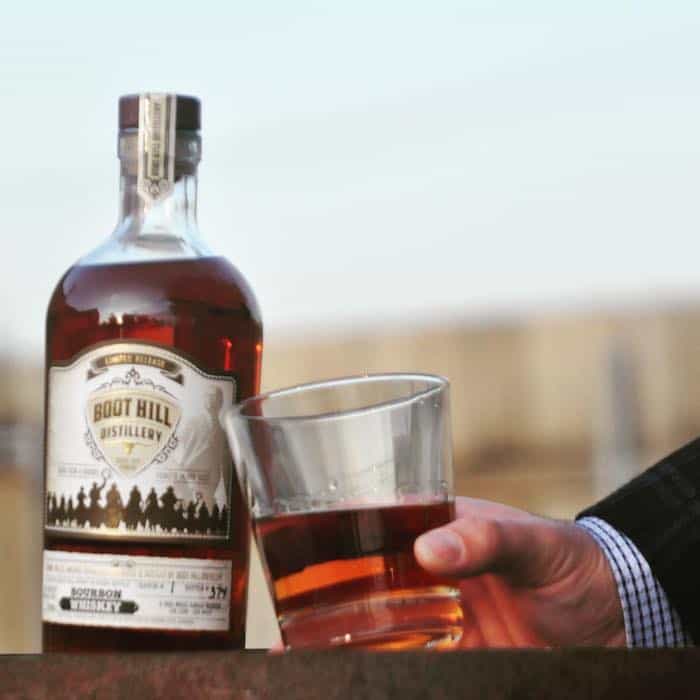 Nose: A very nice and strong scent of smoky oak and cedar, with a hint of a leathery smell. Also with a hint of vanilla and almost a caramel apple tone.

Palate: Very powerful taste of the smoky oak. There is definitely a nice aftertaste of the caramel and apple.

Final Thoughts: This is definitely a nice strong and warming bourbon whiskey. I can see how this bourbon would hold up to the legacy of the Wild West, Dodge City saloons. Not only does it have the strong flavor and warmth of what you would expect of a Wild West bourbon, it has a certain sweetness and unique flavor that I have not tasted in any other bourbon.

Vital Stats: The Red Eye Whiskey is blended from a mix of different barrel sizes and ages, to create this “Frontier Style Whiskey.” 80 proof (40% ABV).

Nose: This whiskey has a nice deep smoky vanilla smell, with a slight hint of butterscotch.

Palate: The Red Eye Whiskey has a strong hit of spice when it first hits your mouth. This is followed by a slight sweetness of the vanilla and butterscotch flavor.

Final Thoughts: Boot Hill Distillery describes this Red Eye Whiskey as a ‘Frontier-style’ Kansas whiskey, and compares it directly to the type of whiskey you would have had in Dodge City in the 1880’s. While I don’t know exactly what those whiskey’s and bourbons tasted like 140 years ago, I can say that it definitely evokes that feeling.

I could easily imagine sitting in the Long Branch Saloon, sitting across the card table as Doc Holliday dealt out the cards for a poker game. Once again, Boot Hill Distillery has created a very well done, and unique flavored spirit.