Editor’s Note: These whiskies were provided to us as review samples by Barrell Craft Spirits. This in no way, per our editorial policies, influenced the final outcome of this review.

Barrell Craft Spirits seems like it’s putting out an increasing number of products. That doesn’t seem all bad, to me. They’re an independent craft bottler and make bourbon, whiskey, rye, and rum. Just about everything I’ve tasted from them has been high-quality and well-crafted.

But Barrell also has a little bit of attention-deficit disorder (ADD) when it comes to their products, in that their alcohol ADD (AADD?) creations are made in small batches—and when they’re gone, they’re gone. That makes sense since they don’t make the whiskey (though they have that in the works too), they only bottle it.

Barrell is like the running shoes of whiskey. I don’t mean the smell. I mean the availability. Because shoe companies change shoes all the time. Even the same model of shoe gets “updates” as time goes on: cushioning, materials, or color. Or sometimes shoes are retired and you’ll never see them again. And there are even variations between two pairs of the same shoes! So if you find a shoe that works for you, buy a lot and hoard them.

Two of Barrell’s recent releases, the Barrell Bourbon New Year 2019 and Barrell Dovetail, recently came across my tasting table. Both incorporate barrels from across various states and regions, as well as different kinds of finishes. The New Year 2019 batch brings together reserves from barrels across six states, and the Dovetail is a blend of whiskeys finished in Dunn Vineyards Cabernet Sauvignon casks and in black strap rum casks and late bottle vintage (LBV) port pipes. Adventures in Whiskey ponders what my excellent tasting partner and I also wondered about the Dovetail: If so many different barrel finishes are involved, can you still call this whiskey?

Not sure. I’ll think about it during my next run. 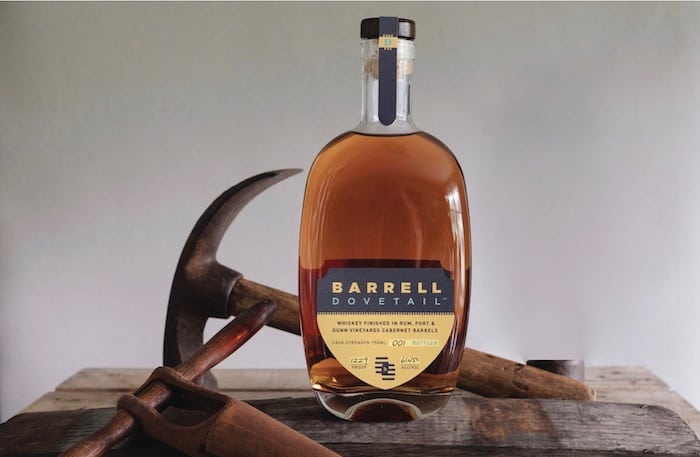 Appearance: The color of all the whiskies I’ve loved before. Also complementary and unbranded butterscotch candies in the bowl at a restaurant’s hostess stand.

Palate: Like most of Barrell’s whiskies, this is high-proof. But this also tastes fiery and high-proof, in a way that most of their products do not. It doesn’t taste like pure alcohol, like moonshine or white dog, but it does taste like Cinnamon Red Hots. It also doesn’t finish any differently than it starts; not as complex as some of their other batches. It’s fine, but it doesn’t bring as much to the table as I’d expected.

Appearance: Darker and richer than the New Year 2019. Also the color of browned butter. And a smoked cigarette filter.

Nose: For all the richness of all those casks, this is surprisingly light on the nose. It’s one where you really have to lean into the glass. After that, there’s some brown sugar, and angel food cake.

Palate: Ok so this is interesting (and I mean that in a good way). It is not fiery—wait, no, it finishes just a little fiery, but it doesn’t begin that way. It’s sweet like mixing together a slightly melted box of Breyer’s Neopolitan ice cream. There is, admittedly, a lot going on. I liked that; my co-taster didn’t. “Would you ever mix rum, port, and bourbon in the same glass? I wouldn’t,” he said.  I don’t disagree in principle–and yet: This whiskey is like an orchestra or composition you don’t think will work but totally does. It may seem a little weird when you consider all that’s involved, but there’s also a fun richness and weird blending and tuneful quality to it. Like Mongolian Death Metal.