Historically, I’ve associated fruit trees with Florida-grown crops (and as a non-Floridian, I expect I’m not alone in this). But upon learning about Timber Creek Distillery, located in Crestview within the Florida Panhandle, it didn’t come as too much of a surprise to learn that the “Sunshine State” is also home to many other crops – including a variety of grains. And where there’s grain, there often is (or should be!) whiskey.

Timber Creek is situated on a 1,400-acre family farm, founded in 2014 by neighbors Camden Ford (an engineer and entrepreneur) and Aaron Barnes (an avid home brewer) who combined individual expertise, experience and shared passion to evolve from experimentation to opening a full-fledged craft distillery that includes vodka, rum, brandy and (of course) whiskey. Notably, the latter includes “Florida’s first bourbon”.

Timber Creek’s current whiskey line-up includes a bourbon, “reserve” bourbon, Black Rye and a consumer focused whiskey blending kit (comprised of four bottles of single-grain whiskeys that imbibers can experiment with and blend as desired). The grain used in the whiskeys is at least 95 percent Florida-grown – including local Red Soft Winter Wheat, local Yellow #2 Dent Corn, and Florida 401 Black Rye – with separate barrels used for each.

The distillery boasts custom designed distilling equipment in an effort to “extract the most flavor of [its] raw ingredients”. In-line with practices traditional of Scotch distillers and beer brewers, Timber Creek utilizes a roller mill to crack its grains, rather than the grinding action more typical of a hammer mill. Then comes mashing and lautering, which removes unwanted solids and minimizes tannins in the final product. Interestingly, each grain used undergoes this whole process individually, with blending occurring after aging. (If you’re interested in learning more about Timber Creek’s production process, I highly suggest reading the very detailed guide included with Timber Creek’s Whiskey Blending Kit.)

Co-owners Ford and Barnes (who is also Master Distiller) appear to have a shared appreciation for detail and meticulousness – but also simplicity. When asked about Timber Creek’s spirits, Barnes has been quoted saying: “It just tastes good.” On that note, here I taste and review Timber Creek’s two bourbons. 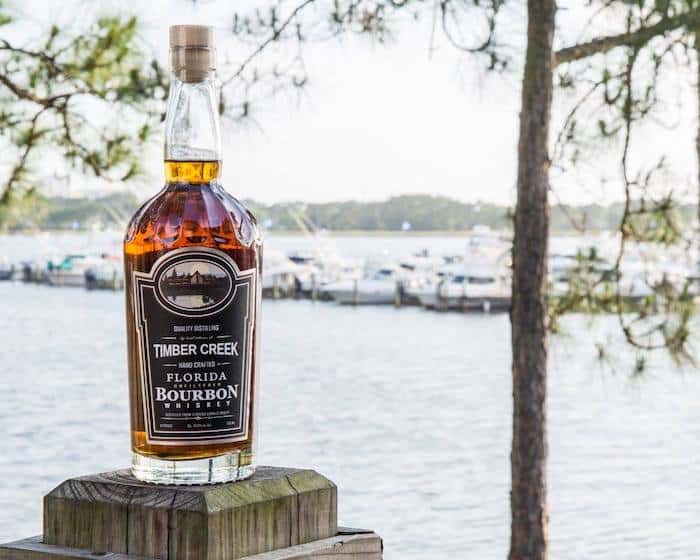 Vital Stats: Timber Creek Florida Bourbon is a “wheated” bourbon comprised of a mix of corn, wheat and barley. It is aged a minimum of nine months in charred Missouri oak barrels and bottled at 93 proof. A 750 mL bottle retails for about $37.99.

Nose: Lots of layers. Front notes include plantains, cherry and all-spice. On the back-end are notes best described as fermentation funk.

Palate: A preliminary flash of heat is suggestively intense, but quickly mellows to a simmer. There is a boldness of flavor and feel, a complexity of balances – a pear sweetness to balance the heat, a cleanness balanced by notes of must and a hint of peat.

This is a solid, drinkable whiskey. The addition of a rock or two works well to temper the heat just enough to bring forth more of the complex layers of the bourbon. I was inclined to describe this as akin to an elevated Buffalo Trace – with some similarities in basic notes, but enhanced in the Timber Creek Florida Bourbon Whiskey.

Unsurprisingly, the respective mash bills are quite similar. For an apparently, and relatively speaking, young bourbon – this has more going on than expected, and is easily enjoyed.

Vital Stats: Timber Creek Reserve Florida Bourbon Whiskey differs at its heart from the distillery’s Florida Bourbon Whiskey, with the addition of a fourth grain in its mash-bill: rye. The “rare” four-grain composition of corn, wheat, rye and barley is aged in charred Missouri oak barrels, and bottled at 100 proof – a few steps up from the distillery’s non-reserve bourbon. A 750 mL bottle retails for about $46.99.

Appearance: Amber, with hues of a dark rose gold.

Nose: Woodiness, oak, leather and shoe polish. A few whiffs transported me to an old, comforting library or study. Notes of musk, wood ash and brandy reveal themselves, along with a vegetal undertone.

Palate: In a sort of reverse compared to the non-reserve bourbon, the Reserve starts smooth and calm, and builds with a peppery and tingling heat. Sweeter notes of roasted vanilla fill the mouth, while more acidic tones of charred grapefruit hit the back of the throat. There is a pleasant lingering aftertaste of coffee toffee and dark chocolate-covered almonds. It tastes of a cellar one might imagine exists at a distillery. Dry yet hefty, complex yet not overwhelming, and with a bit of a cognac-like quality.

True to the distillery’s own description, Timber Creek Distillery Reserve Florida Bourbon is “remarkably flavorful and complex for a young bourbon.” This makes for a nice after-dinner drink to be sipped neat, but also holds its own within a cocktail.

Between this and the non-reserve bourbon, my interest is piqued to see what else Timber Creek develops in the coming years.