Rock Town Distillery, in downtown Little Rock, is Arkansas’s first legal distillery since Prohibition. Founded by Phil Brandon, a sixth-generation Arkansan who got laid off from a job in telecom, Rock Town is serious about locally-sourced ingredients and materials, with everything from grain to barrels being Arkansas-grown or –made. The distillery has been gaining considerable attention recently, thanks in part to a mention a few years back in Jim Murray’s Whisky Bible.

Earlier this year, we reviewed Rock Town’s Fifth Anniversary Bourbon, and we got our hands more recently on a slew of other Rock Town whiskeys to review in coming weeks. I’m starting first with three of the distillery’s bourbons: their Arkansas Bourbon, Three-year-old Arkansas Bourbon, and Single Barrel Reserve Bourbon. All three are made with the same mash bill of 82% corn, 9% barley, and 9% wheat; the differences between them are in the aging. The Three-Year-Old Bourbon, obviously, is aged three years, in standard 53-gallon barrels. The Single Barrel Reserve, meanwhile, is aged about 16 months (reportedly 15.7 months, for the sample I received, from barrel 303), in smaller 25-gallon barrels. No age statement is given for the Arkansas Bourbon, but it seems safe to presume it’s younger than the other two, given that the label notes it’s aged in 15- and 25-gallon barrels.

The Arkansas Bourbon and Three-Year-Old Bourbon are both bottled at 92 proof, while the Single Barrel Reserve is bottled at barrel strength—55.91%, in my case. All three, interestingly, are about the same shade of deep amber. 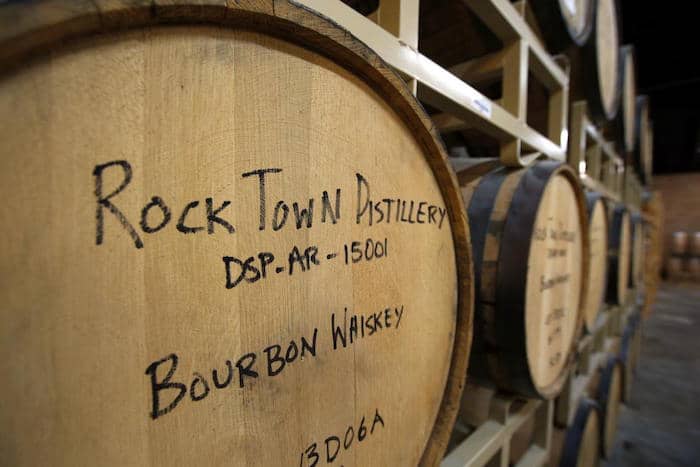 Nose: Dessert-sweet—butterscotch and banana pudding. I also get a wet cardboard note.

Palate: More butterscotch, caramel, and custard notes, with an oily mouthfeel. A hint of baking spice and some light oak.

Nose: Sweet vanilla and honey are balanced out by wood and smoke.

Tasting these bourbons side-by-side is like an experiment in aging time and barrel size, albeit with a limited sample size. While all are fairly sweet, the Arkansas Bourbon is positively cloying—a dessert in a glass, with a slippery, insubstantial texture. The Single Barrel, if anything, goes a little far in the opposite direction, with its woody finish, although it’s still my favorite of the three. The Three-Year-Old Bourbon, finally, is somewhere in the middle, not quite custard-like but definitely heavy on vanilla and caramel.

All in all, it is an interesting start to exploring a distillery with a huge range of American whiskies.