With Portland, Oregon, enjoying (or perhaps suffering from) the stereotype for being among the most socially and environmentally conscious cities in America, it comes as no surprise that it would have a thriving collection of local, independent, and collaborative distilleries within its city limits.

Among the oldest of those is New Deal Distillery, which started in 2004.  Founder and chief distiller Tom Burkleaux and his partner started with a simple business plan, according to their website: “sell one bottle to one stranger off a liquor store shelf.”

That aggressively micro marketing effort apparently worked out, developing into the East Portland distillery that was among the first to help build Portland’s Distillery Row, a collection of eight distilleries clustered just across the Willamette River from Portland’s downtown.

While New Deal reportedly got its inspiration and start with vodka, it also produces a variety of gins and liqueurs, as well as a variety of other spirits – including whiskey – as parts of several series.

Among those series is Distiller’s Reserve, which is three (so far) straight whiskeys produced by New Deal and aged on site. Those are rye, wheat, and bourbon, the latter of which was just released in December of 2017.

All the whiskeys are aged more than three years on site and all are bottled at 40% ABV with a suggested price of about $40 per bottle. 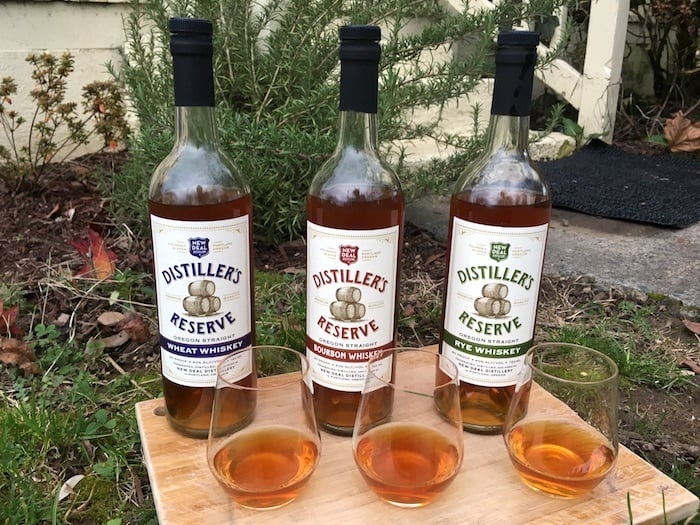 Vital stats: Straight rye distilled by New Deal and aged for more than three years in new, charred American oak barrels. Bottled at 80 proof and sold for a recommended price of about $40 per 750mL bottle.

Appearance: Typical, middle of the road gold color, but with a bit of dispersed residue giving it a slightly cloudy appearance.

Nose: Sweet from the start, opening with honeyed notes of tangerine, plus clove and oak to give it a bit of tang and spice. The honey and tangerine soon weaken to make room for a more subdued toffee, clove, and oak, forming an earthier bouquet.

Palate: Again hits the tongue with a honey-like sweetness with touches of black pepper and clove tingling the mouth slightly along with a faintly smoky dried fruit flavor. The spicy elements build a bit as the sip sits on the tongue, but never attain anything more than a dull roar. Those flavors fade upon swallowing, leaving a distant toasty-honey residue in the mouth along with a few prickles of spice alongside.

Vital stats: Straight bourbon distilled by New Deal and aged for more than three years in new, charred American oak barrels. Bottled at 80 proof and sold for a recommended price of about $40 per 750mL bottle.

Appearance: Another middle-of-the-road gold whiskey, a bit darker than the rye and with more sediment making it appear even cloudier.

Nose: A bit of a tangy and sweet scent at the outset with lemon, grains, and simple syrup as the base and notes of oak and faint flowers giving the bouquet a bit of texture. That mellows into a rich vanilla aroma with notes of oak, orange and a touch of nutmeg.

Palate: Starts off like a very mellow caramel – sweet and rich but not overwhelming, with a bit of a burnt, smoky flavor in the background. That caramel remains the base, but it makes room for flavors of corn, oak and pepper to mix in to make the sip smokier and spicier as it remains on the tongue, but again not overwhelmingly so. Swallowing yields a small burst of pepper and then strips those flavors back to a faint and distant brown sugar. The pepper tingles the mouth a bit, but I was generally left with just a sweet, smoky molasses residue on the tongue.

Vital stats: Straight wheat – and like the others – aged for more than three years in new, charred American oak barrels. Bottled at 80 proof and sold for a recommended price of about $40 per 750mL bottle.

Appearance: Very similar in hue to the others, an average gold-colored dram about the same color as the bourbon but the least sediment-clouded of the three.

Nose: The heaviest-hitting of three on the nose – a sweet and tangy bouquet of sweet vanilla competing with tart lemon and grains. That settles down into a sweet and rich vanilla with notes of pepper and rye-like, and oak.

Palate: Hits the tongue like a sweet, rich, and earthy caramel with a stronger than usual smoky elements to the flavor. That gradually develops spicy attributes as it sits on the tongue, especially pepper and nutmeg, building up to be spicier than the others but still not overpowering. Swallowing sends a burst of spice throughout the mouth, which then eases into the sweet, rich caramel from the beginning that coats the tongue and the mouth – occasionally tingling the corners of the mouth with pepper – for another minute or so.

To sum up New Deal’s Distiller’s Reserve Series, they are all fine: above average but not extraordinary. All three are on the sweeter side of their particular whiskey category. The rye especially lacks the spicy elements of many other ryes making it smooth but relatively bland in comparison. The bourbon is also sweeter, but with enough potency to make it a good starting point if you’re working your way into bourbon. The wheat was actually a bit spicier than I normally encounter among wheats, making it refreshingly complex and the best of the three. Taken as a whole, the Distiller’s Reserve is good but not extraordinary; OK for sipping and probably great for mixing.