Editor’s Note: This whiskey was provided to us as a review sample by Rogue Spirits. This in no way, per our editorial policies, influenced the final outcome of this review. It should also be noted that by clicking the buy link towards the bottom of this review our site receives a small referral payment which helps to support, but not influence, our editorial and other costs.

Oregon is known for its craft beer and craft spirits. Rogue is known for both, and recently, both worlds have collided with the launch of their limited edition Rolling Thunder Stouted Whiskey. Rogue Ales & Spirits was founded by three Nike executives in 1988. While the original location was in Ashland, Oregon, Rogue’s headquarters have remained in Newport, Oregon, for 32 years.

The distillation aspect began in 2003, and while Rogue makes a variety of spirits, their signature is the Rogue Dead Guy Whiskey. Everything that Rogue makes is made with raw materials from their own farms. When you bring up Rogue Ales & Spirits, you will find a divide amongst drinkers. There is no middle-ground, as people either love it or hate it (or prefer only the beer instead of the spirits).

The Rogue Spirits Rolling Thunder Stouted Whiskey is the Rogue-iest Rogue spirit. Even though it is a limited edition, I do not foresee it going away. Rolling Thunder is the name of Rogue’s cooperage, and each virgin oak barrel made holds Rogue’s Dead Guy Whiskey for two years. After the whiskey is bottled, the used barrels then hold Rogue’s Rolling Thunder Imperial Stout for nine months. Once the beer is transferred out of the casks, Rogue then refills them with their Dead Guy Whiskey for another two years to get all the flavor.

Typically, Rogue Dead Guy Whiskey rings in at 80 proof. However, the Rogue Spirits Rolling Thunder Stouted Whiskey comes in at cask strength with a proof of 116.26. The Imperial stout itself has a 14.4% ABV and 63 IBU score, so let’s see how it impacts the flavor of the Dead Guy Whiskey. 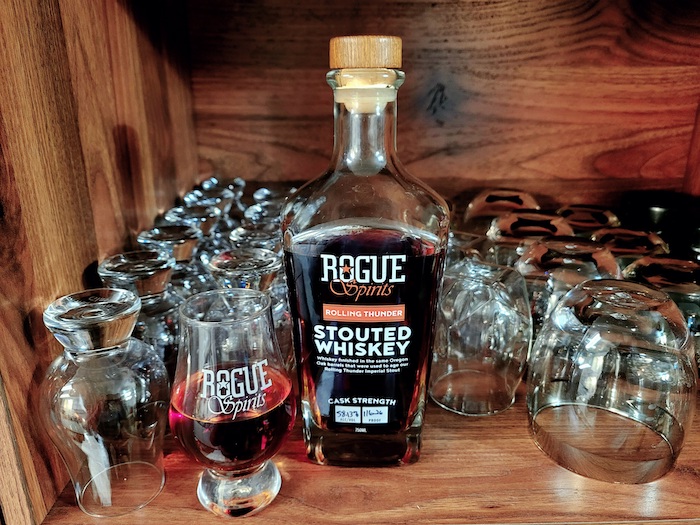 Nose: The nose is bold and syrupy, yet it also has that beer yeast note. The Rolling Thunder Imperial Stout impacts the nose of the whiskey a lot. Compared to the plain Dead Guy Whiskey from Rogue, I find heavy dark chocolate and coffee. It seems that the stout turns the normal vanilla and caramel into cinnamon brown sugar and raisin.

Palate: The mouthfeel is hot and oily, but that goes away with a bit of water or ice. The whiskey definitely tastes like a stout. Underneath the heat from the ABV is spicy cinnamon with smoked vanilla. The palate then moves into bitter dark chocolate and coffee beans, which gives a welcomed dryness. The sweetness comes back with raisin and fig, and maybe a little muscovado. The finish is malty and creamy, like the head on a pint of beer.

Yeah, so I like it. I mean, I would prefer to just drink the stout itself, but somehow, the Rogue Spirits Rolling Thunder Stouted Whiskey works. The stout really impacts the flavor of the Dead Guy Whiskey. I was not expecting the smoked vanilla, and combined with the chocolate and espresso it is balanced in flavor. I do not like it watered down, so I recommend keeping the bottle in the freezer or fridge.