Over the past few years, there have been revivals of past names and brands in the world of whiskeys. Many of these new labels have historic undertones to their origin stories. Among these are stories that involve an old family recipe long forgotten, whereupon somebody discovers an old bottle in an attic or storage somewhere.

As the story goes, “George Roe & Co helped build the golden era of Irish whiskey in the 19th century. Their distillery at Thomas Street in Dublin extended over 17 acres and they were Ireland’s largest exporter of whiskey. As neighbours for hundreds of years George Roe & Co and Guinness were the two biggest names at the heart of Dublin’s historic brewing and distilling quarter.”

However, the distillery ended up closing down in 1926 and very little remains, save for the distillery windmill and a single pear tree. That tree still flowers to this day and is said to be a reminder of the legacy of Mr. Roe and an inspiration for this new whiskey.

Roe & Co was launched in 2017 by Diageo, after having been without an Irish whiskey since 2014, when they unloaded the Bushmills brand. The release is said to be inspired by the resurgence of Irish whiskies amongst other brown liquor powerhouses such as Bourbon and rye from America, Scotch, and Japanese whiskies.

Diageo claims that this product represents a profile that is “perfected by bartenders, for bartenders,” being a collaboration between the company’s Master Blender Caroline Martin and “five elite Dublin-based bartenders who together crafted a unique Irish whiskey blend that would hold its own in cocktails.”

Martin has been with the Diageo company for over 33 years and has worked mainly in the realm of Scottish whisky, with such as the likes of Johnny Walker and J&B Rare. Nowadays, she’s at the helm of Roe & Co as the Master Blender. Also among her credentials are being a Keeper of the Quaich, a highly exclusive international collective of those that have shown substantive dedication to the Scotch industry. 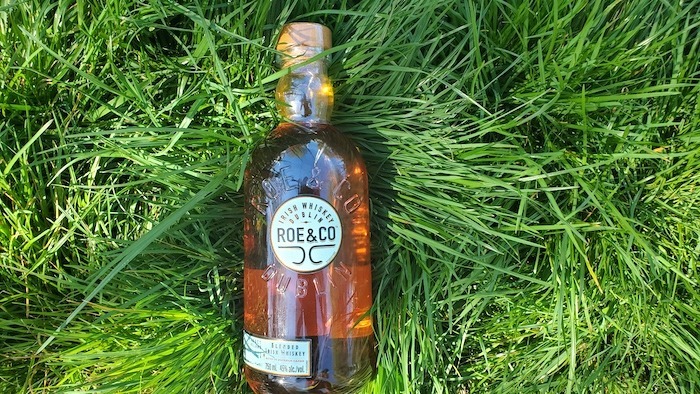 Vital Stats: 90 proof, 45% ABV. This whiskey is a blend of malt and grain whiskies that were further aged in second-fill Bourbon barrels. Suggested retail pricing of approximately $35 per 750ml.

Appearance: Light orange, though depending on the light there were yellow hues. A swirl in the glass revealed many quick-forming legs.

Nose: Definitely on the sweeter side for this one. Think honey and orange zest, but also floral elements somewhere between eucalyptus and honeydew.

Palate: The flavors for the Roe & Co were pretty straightforward and reminiscent of what you pick up in the nose. The whiskey itself is on the lighter side, so the finish doesn’t last that long. The primary elements were there, though with the addition of a touch of black pepper. Just enough spice to be a pleasant surprise.

This is a solid daily sipper, though for the price point, the competition is fierce. It's worth picking up a bottle and seeing for yourself. Maybe share it with some friends and see where they believe this one belongs in the spectrum of Irish whiskeys.

I'm certainly curious as to what future iterations will emerge from the brand and Master Blender Caroline Martin. These days, different barrel finishes are abound and as always, I'd like to try out a cask strength version.

3.5
User Rating 2.8 (5 votes)
Sending
7
Shares
2.5k
Views
Share on FacebookShare on TwitterGet Our Newsletter
Cheers to the Dads! Personalize a bottle of his favorite whiskey to create a modern gift for the modern man. Use code: FATHERSDAY20 for $20 off your next order of $100 or more at ReserveBar