Sugarlands Distilling offers what they call America’s number one distillery experience. How they quantify this, I don’t know, but it’s also the top-rated thing to do in Gatlinburg, Tennessee, according to TripAdvisor.com.

I’m generally wary about anything but hotel reviews on TripAdvisor—I’ve seen what comes up when I search for the top Portland, Oregon restaurants, and I just laugh—but this is legit. According to Distillery Trail, it gets about as many visitors as the whole Kentucky Bourbon Trail gets. So okay, that’s pretty big.

As we reported back in August, Sugarlands is known to most as a producer of moonshine (they even partner with the Discovery Channel’s “Moonshiners Legends). And yet, they also make their own aged whiskey, such as their Roaming Man Tennessee Straight Rye Whiskey. It’s two years and two months old, bottled at a cask strength of 122.2 proof and aged in new, charred oak. The mashbill is 51 percent rye, 45 percent corn and 4 percent malted barley.

It’s so popular that their second batch is already sold out…but we managed to get our hands on this elusive bottling for a review. 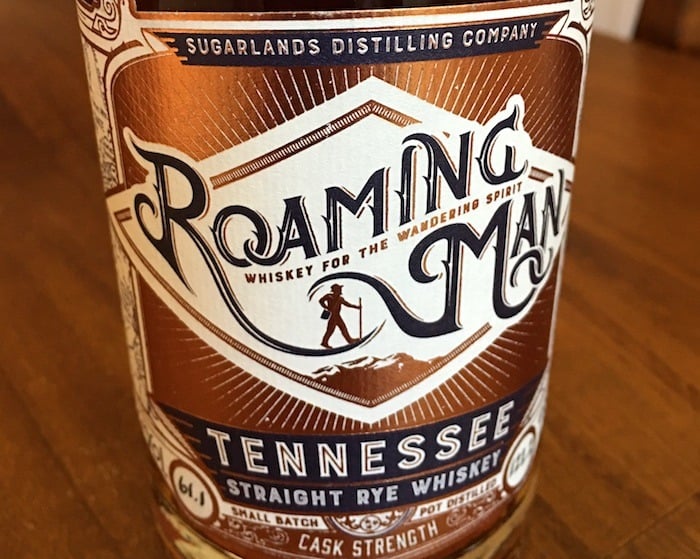 Nose: If you like dessert, you’ll love this nose. Caramel, peanut butter – those enormous “turtle candies” in fancy candy shops. It smells creamy, too, like you’re leaning in to scoop from a vat of French vanilla ice cream. But it’s not like a dive-bomb of sweetness-it’s more upscale, more sophisticated.

Palate: It tingles, like a rye, and also like a high-proof whiskey. And yet this roaming man (would have loved to know more about the name, Sugarlands) stops at tingle and doesn’t continue onto sting or burn. It reminds me of bourbon, which I attribute to the high corn content. The creamy nose and silkiness continues on the palate, too. You know how they recommend you cut fiery things with ice cream? This tastes a little like that, with e a burn that’s easily quenched. For only being aged two years it carries a surprising maturity and heft. Impressive.

I quite like this. I don’t know if I’d use it in a mixed drink: Because it’s so high-octane, but without that ethanol scorch, I think it does a nice job on its own. If you want to keep quenching any heat you could also go the rocks route. This is one of those whiskies which I think could also work as a digestif. It’d serve as dessert as well as a palate cleanser without being astringent.

I'm delighted to have this in my collection. Could this be a right answer from Trip Advisor? I might have to make the journey and decide for myself...