Before I tasted this whiskey, I didn’t look closely at the label. I just noticed the “Ridgeline” on it is much larger than the “Barrel Aged Vermont Whiskey.” Because of my impeccable attention to detail, I didn’t see the “Vermont” and had assumed it was a Kentucky whiskey, because of the word “ridgeline.” No idea why. It’s been an odd few weeks.

Upon scrutinizing the label a little closer (and updating my glasses prescription), I was surprised to see the ridgeline in question referred to the Green Mountain ridgeline in Vermont, part of the Appalachian Trail. Ridgeline Barrel Aged Vermont Whiskey is made by Appalachian Gap Distillery.

According to their website, a “gap” in Vermont refers to a mountain pass that runs generally east to west. Their namesake is on Vermont Route 17, the highest point on the road that runs between Bristol and the Champlain Valley and Waitsfield in the Mad River Valley. This whiskey, along with their other spirits, are made in Middlebury, Vermont.

The distillery has a commendable commitment to sustainability: All the electricity they use in their building is provided by solar. They actually have more than they can use, so they provide credits to their employees. Also, all their waste grains are given to local farms for feed, and the water they use is constantly captured, tested, and pH checked to ensure they’re not polluting the waste stream.

The mash bill for this whiskey is a bit of a jumble, with no primary grain: 45 percent barley, 30 percent corn and 25 percent rye. It is double-distilled, then aged in a mix of aged in ex-bourbon, new American oak, and port wine barrels and latter bottled at 98 proof. 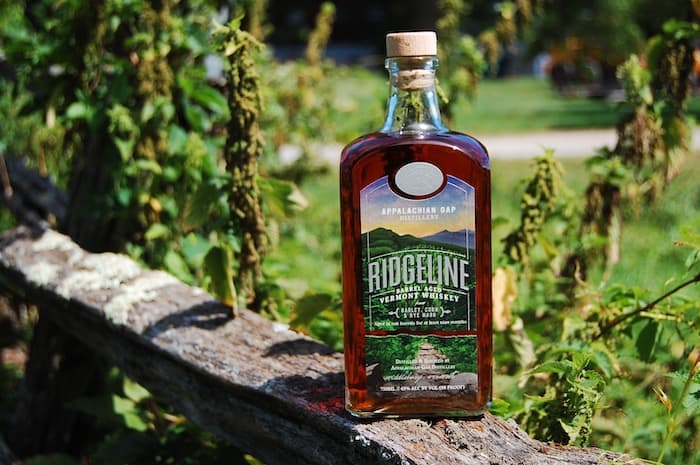 Appearance: Reddish brown with a shine—like newly polished teak that has yet to see any wear and year. A new, un-creased leather belt.

Nose: Now this is unusual. I happened to taste this after tasting Four Roses yellow label, which has an unobtrusive nose. This one is very different: It’s strong, potent. Toasted walnuts. Also cheese: Like cheese aging in an old shed that you’re happy to discover. (I do think a lot of whiskey goes well with cheese, so maybe I’m just wired to smell cheese when I sample whiskey.)

Palate: Whoa, the palate is nothing like the nose. It’s more complex than its smell would suggest. Cinnamon and woodsy like a high desert forest. There is slight smoke on the finish—but I wouldn’t call this smoky—and a sweet echo from the port barrels in which it’s aged. Rosemary and licorice. It keeps changing the more I sip. It’s on the higher end, proof-wise, but it’s not firewater. Probably not something I would choose for an everyday sipper, but very interesting.

There’s enough complexity to keep you thinking. It’s not something I’d reach for again and again, but I didn’t dislike it. I’d sip this over ice and not make a drink out of it-—quite frankly, this whiskey's a little too weird and perhaps difficult to find a drink that works with its hard-to-pin-down qualities. It’s not a Daily Driver bottle. It’s the whiskey equivalent of the coworker who you can’t really read, but then go for drinks with and they're surprisingly fun…but then you come into work the next day and don’t talk much.