While whiskey’s roots are in the American south, wine has historically been the domain of the Golden State. So it would only make sense that California’s whiskey distillers would have close ties to the wine industry. So it is with Re:fined distillery.

Re:find distillery is an offshoot of Villicana Winery. The project, started by Alex and Monica Villicana, is based around using what would otherwise be considered waste products from parts of the beverage industry to make their spirits.

For example, they distill their main spirits, gin and vodka, using free-run juice from red wine grapes, or saignée, instead of the usual potato or grain. After success in clear spirit distilling, they’ve more recently transitioned to producing handcrafted whiskey with the introduction of Re:find Handcrafted Rye.

While their other spirits are made from byproducts of their own winery, the Handcrafted Rye Whiskey is made in partnership with neighboring SLO Brew in San Luis Obisbo and BarrelHouse Brewery in Paso Robles. These two breweries make the wort that comprises their custom mash bill. From there, the whiskey is fermented, distilled, aged and bottled at Re:find’s Paso Robles distillery. 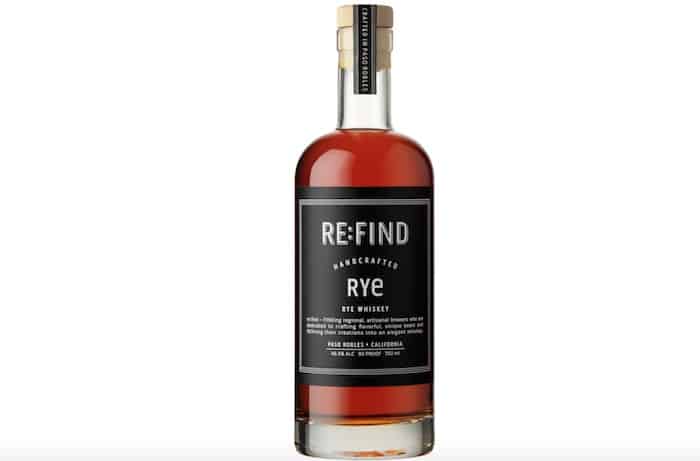 Appearance: In the glass it has a deep clear caramel hue with a touch of marmalade.

Nose: Right of the bat you get a hit of fruit-forward sweetness. After a while, a distinct sea breeze smell with a cedar aromatics starts to appear. Towards the end it transitions to an almost imperceptible aroma of new leather.

Palate: The flavor of the whiskey, much like the nose, is simultaneously subtle and complex. The first sip reveals a berry sweetness mixed with medium level spice – specifically hints of rosemary. The finish transitions to a dark chocolate with touch of green tea and citrus.

It’s a rare find, but if you’re able to get your hands on a bottle of Re:find Handcrafted Rye Whiskey, you won’t be disappointed. It is an impressive rye for a first time whiskey producer, and an encouraging sign of what cooperation in the beverage community can produce.

This is a good entry to rye whiskeys, but also provides enough of a subtle flavor for rye drinkers looking for something a little different, too. Re:find is still aging their Bourbon Whiskey, which is due to be released sometime in 2017. I’ll be interested to taste it.