Editor’s Note: This whiskey was provided to us as a review sample by Pernod Ricard. This in no way, per our editorial policies, influenced the final outcome of this review.

Red spot sounds like a disease, but it’s not. It’s actually an Irish whiskey, although it’s one that might cause the most fervent Irish whiskey-o-philes to break out in excitement-related hives.

Back in fall 2018, Red Spot Single Pot Irish Whiskey appeared on the market for the first time since the mid 1960s. It joins its color-coded brethren, Yellow Spot and Green Spot, in the Spot Whiskey range, a line first introduced by the Mitchell & Son company at the turn of the 20th century.

The Mitchell family were prominent Dublin wine merchants during the 1800s. In 1887, they decided to branch out into the whiskey business, and began maturing whiskey sourced from the nearby Jameson Distillery in their cellars alongside barrels of sherry and cases of claret. Splotches of colored paint were used to indicate their views on the aging potential of each cask. Blue spots indicated seven years, green spots 10, yellow spots 12, and red spots 15, the pinnacle of the range.

While this iteration of the whiskey comes from Irish Distillers, part of Pernod Ricard, the Mitchells were still reportedly hands-on during the entire process, using old family recipes and records to recreate what the original Red Spot may have tasted like. “It has been a pleasure and a privilege to work with the Mitchell family on the reimagination of Red Spot and bring a piece of Dublin’s rich whiskey history back to life,” Kevin O’Gorman, master of maturation at Midleton Distillery, wrote in a statement.

A single pot still whiskey, Red Spot is triple-distilled from a mash of malted and unmalted barley on pot stills, then aged 15 years in a mix of bourbon, Oloroso, and marsala-seasoned casks. It’s bottled at 46% alcohol without chill filtration, and has a suggested retail price of about $130. Let’s have a spot. 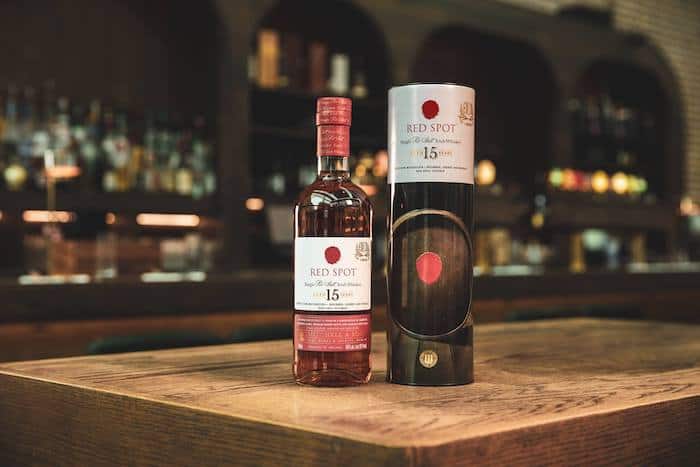 Palate: Subtle, with orange, pineapple, gentle vanilla, creamy custard, and even a touch of watermelon dancing across a rich, grainy backdrop. Rich, full, and weighty on the palate, although the finish is rather short, with flecks of cinnamon and clove.

Red Spot one of the tastiest Irish whiskeys I’ve ever enjoyed. Rounded and soft, civilized and refined, it’s a dram you could pour for your boss or your mom with equal confidence. If you’re looking for an urbane, gentle whiskey with an easygoing nature and polished attitude, Red Spot hits the spot.

The idea of auctioning off...
READ ARTICLE 
Scotch