When people think of New York, all sorts of things comes to mind. There’s the city itself, the Statue of Liberty, Wall Street. Bankers and business people. Brooklyn hipsters. But, of course, there’s a whole lot more to the Empire State than that – in fact, New York City only takes up about a half of a percent of the total size of the state! As a non-city New Yorker, I like to remind folks that the world doesn’t end at the upper edge of the Bronx. There are farms! Forests! Other towns (cities, even!).

However, even the most well-traveled New Yorker would be unlikely to list “whiskey production” on the front page of things New York is known for. But thanks to some help from the governor to make things easier (and more affordable) for new distilleries to open up, things are starting to change for the state.

Originally Honeoye offered three spirits: a vodka, a gin, and a rye-dominated whiskey. They have, however, since expanded, and their menu now runs the gamut from bourbon to absinthe to something they call “distilled honey” (which, actually, sounds pretty good…).

I’ve generally been skeptical of distilleries that spread themselves too thin. Call me old fashioned, but when it comes to making spirits, I’m generally a believer in specialization over generalization. And, sure, some skills might carry over from vodka-making to bourbon brewing… but, also, a whole lot won’t. But, hey, that’s not to say that I haven’t been proven wrong before!

Now one of the elements that makes small town distilleries attractive is how they can help their community come together. With their Red Saw Rye, the subject of this review, Honeoye made sure to source 100% of their grains from their home county of Monroe. They also, with this offering, have chosen to go heavy on the rye: the mash is made of 85% rye and 15% malted barley. So I’m expecting a bit of spice to this one!

At their on-site bar and restaurant they’ve got a list of different mixed drinks one can make with their offerings, and they’ve come up with some pretty interesting ones. But, the real test of a whiskey must first come straight and clean. Let’s see how the Red Saw Rye measures up. 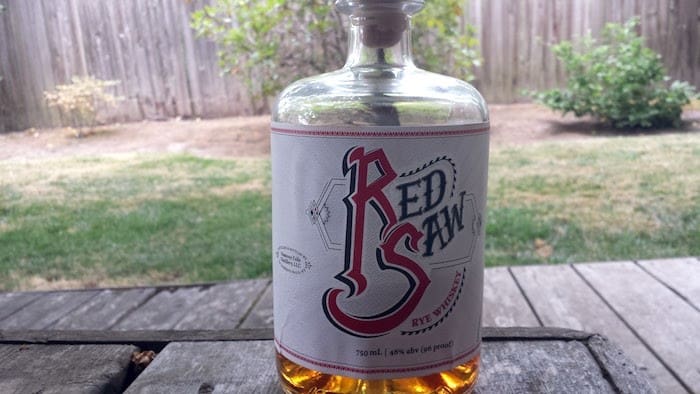 Vital Stats: The Red Saw Rye is made from a mash of 85% rye and 15% malted barley, both of which are locally sourced. The bottle for this review, coming from batch number 4, was aged for 6 months and comes in at 96 proof. A 750 ml bottle will cost you somewhere around $60.

Appearance: The Red Saw Rye is a honey-amber in the glass, with legs that look to fall right in the middle of the spectrum: mid-width, and neither fast nor slow.

Nose: You can tell that this one’s made with a higher rye mash. A sharp, sweet nose. Almost floral. Cinnamon and mulled wine, rose and honeysuckle.

Palate: It’s interesting – there’s certainly a great deal of sweetness here, but it doesn’t open up until later. The palate starts sharp – ever have those cinnamon fireball sucking candies? Imagine the first quick bite of one of those – before quickly fading away to the back of the tongue. There’s a bit of a pause, and then the aforementioned sweetness rises up from the back, heavy with caramel and melon. It fades leaving a faint bitter, cloying weight on the back of the tongue.

Not bad. Not great, but not bad. There’s a shallowness of flavor in the mouth that I’m finding a little disappointing here, as if the true flavor of the rye doesn’t show itself until after you’ve swallowed… but by that point, you need to contend with an unpleasant early-morning cottonmouth taste that underlies the whiskey’s more interesting flavor profile. I ended up taking a note from their website, and tried adding it to a cocktail of my own (a whiskeyrita, if you’re wondering), and enjoyed it a lot more!

Unfortunately, there’s a wide range of great mixer whiskeys that don’t cost upwards of $60. I won’t say don’t buy it... but you could probably get more bang for your buck elsewhere.