Editor’s Note: This whiskey was provided to us as a review sample by Rabbit Hole. This in no way, per our editorial policies, influenced the final outcome of this review. It should also be noted that by clicking the buy link towards the bottom of this review our site receives a small referral payment which helps to support, but not influence, our editorial and other costs.

Every good brand has a story behind it. The story behind Rabbit Hole Distillery, founded in 2012 in Louisville, is largely about bourbon.

Whiskey maker Kaveh Zamanian left private practice as a clinical psychologist in Chicago to build a spirits company, relocating to bourbon’s heartland. He likes to call bourbon “America’s native spirit,” a phrase that appears in much of Rabbit Hole’s marketing materials.

In case there was any doubt, the Rabbit Hole website tells the tale this way: “After finding monotony in the bourbon landscape, [Zamanian] entrenched himself in the work and study of bourbon in the pursuit of starting his own distillery. A place where he could create something new. Something personal.”

He certainly created something new and successful, in short order. Pernord Ricard, the world’s second-largest spirits company, bought a majority stake in Rabbit Hole only seven years after the distillery was founded. The Rabbit Hole facility opened in 2018 and immediately became one of the gems of the Kentucky Bourbon Trail, featuring a sleek, modernist experience in “NuLu” (New Louisville). The Louisville Courier-Journal recently called it “the architectural icon of the Kentucky Bourbon trail.”

But Zamanian, and the distillery he founded, are ultimately about more than bourbon. While the core Rabbit Hole releases include three bourbons, there’s also a straight rye. Now, the first expression in what Rabbit Hole is calling its Founder’s Collection is also a rye.

The Boxergrail name shared by both of the ryes is a tilt of the cap to Louisville native Muhammad Ali, and more broadly to the city’s history of neighborhood boxing gyms. At the risk of an obvious cliché, the Founder’s Collection rye definitely comes out swinging, at 114.6 proof and with a distinctive, wood-forward lean.

Rabbit Hole said the Founder’s Collection expressions, this one included, come from hand-selected barrels Zamanian couldn’t bring himself to blend. “These ‘honey barrels’ will be bottled in numbered editions and offered at cask strength to ensure that connoisseurs experience the liquid as it’s meant to be, untouched,” Zamanian wrote in September, announcing the Founder’s Collection.

“I feel like the barrels talk, and if you listen, you’ll get just what you’re looking for,” he wrote me recently, when I inquired about why he chose these particular barrels for the Founder’s Collection debut. “I knew they were pitch perfect and that at this point in time, it was the right time.”

Each Founder’s Collection bottle comes with a noticeably heavy gold medal cork engraved with Zamanian’s family crest and the Latin phrase “Amare et Opus,” which translates as “to love and work.” The engraved glasswork on the bottle is top-notch, also. Rabbit Hole clearly wants to stand out on the shelf next to other whiskies.

Whether Rabbit Hole will stand out in the global whiskey marketplace long-term remains to be seen. It is still, after all, a young brand. But it has Pernord Ricard’s financial resources, a noteworthy location on the Bourbon Trail (there are already expansion plans, with work starting in January) and the obsessiveness Kamanian apparently brings to making high-end whiskey.

I certainly wouldn’t count Rabbit Hole out of the fight. 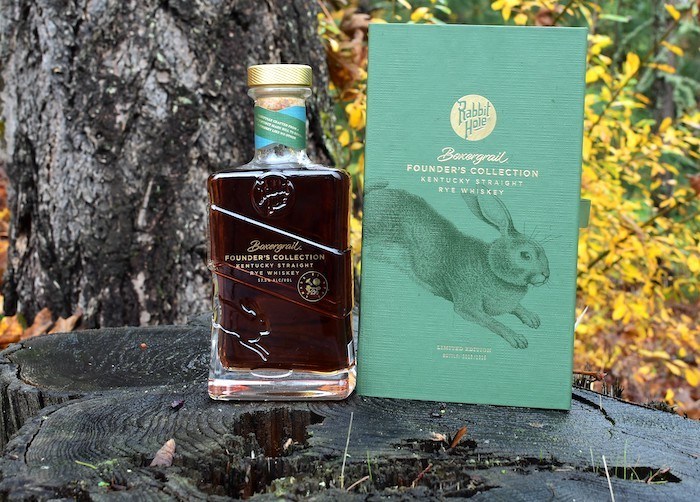 Nose: It’s boozy. Give it a little time, though, and you discover a series of oak-forward smells like honey, vanilla and butterscotch. Beyond that, there are Ghiradelli Dark Chocolate Mint Squares and hints of brown sugar peach cobbler. Add a splash of water, and the layers really start to unpack themselves.

Palate: You know immediately this is a big and bold whiskey. You get aggressive rye spice and an oily mouthfeel. There’s something vegetative going on, too. Fresh-cut grass, maybe? Eventually, it starts to settle around Assam tea and tobacco leaf. The finish is long, slow and warm, reminiscent of brown sugar.

Coming from seven barrels said to be the first rye whiskey Zamanian ever made, the Founder’s Collection rye is limited to 1,315 bottles. (The one reviewed here is no. 632.) The standard Boxergrail rye is 95 proof and aged at least three years, while this version is 114.6 proof and spent six years in new oak. Time in barrel makes its oaky presence felt, though admittedly more on the nose than in the mouth. Ultimately, this is good whiskey with a distinctive personality. It makes me look forward to seeing what Rabbit Hole – and Zamanian – will develop in the future.

“With Founder’s Collection, I have more freedom to experiment with a range of specialty malted grains and different finishes to deliver a wider range of expressions that enhance what we’re doing with our core line, yet are completely unique unto themselves,” Zamanian wrote to me. So expect further experimentation. He said the next Founder’s Collection release will come in April, an undisclosed whiskey aged in Mizunara oak.