Editor’s Note: This whiskey was provided to us as a review sample by R6 Distillery. This in no way, per our editorial policies, influenced the final outcome of this review. It should also be noted that by clicking the buy link towards the bottom of this review our site receives a small referral payment which helps to support, but not influence, our editorial and other costs.

In July, we wrote about several new distilleries, including Los Angeles-based R6 Distillery, which has been around since 2014 and claims to have distilled Los Angeles’ first legal bourbon.

R6, a family- and veteran-owned grain-to-glass distillery, gets its name from the six Ruben brothers who opened Rubens Rialto Theatre in Joliet, Illinois in 1926. Years later, their descendant Rob Rubens would take a tour of the Old New Orleans Rum Distillery and decide to bring that same vibe to LA. (The distillery, that is: not Joliet. At least I’m assuming.)

The mash bill  for R6 Single Malt includes peated malt, distiller’s malt, chocolate malt, and coffee malt. According to Caskers, this whiskey has spent at least one year in American charred oak barrels. This is the second release of their single malt, which can be purchased at their distillery in El Segundo, CA.

In our previous review of three of R6’s whiskies, my colleague advised relegating them to your mixer rack; So I was wondering if this product might make it to the shelf. Let’s find out. 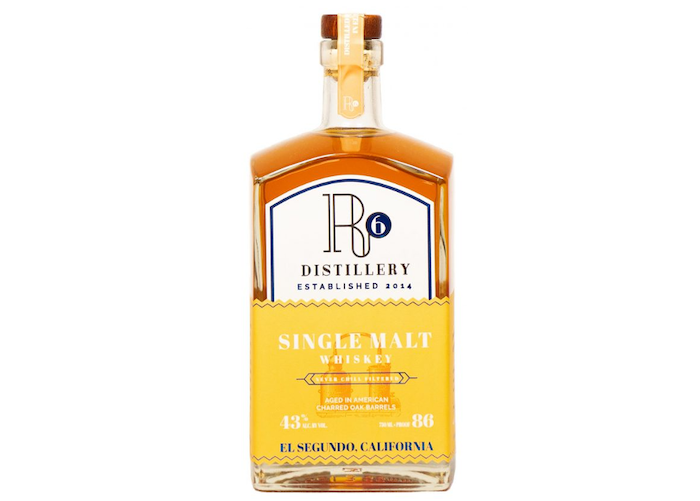 Vital stats: About $75; a mash bill of peated, distiller’s, chocolate, and coffee malts; aged at least a year.

Nose: The nose is not terrible. There is coffee, but a fruitiness to it, like coffee beans before they are dried. Toffee. Butter. This smells more like how I would expect a bourbon to smell; though not quite as deep and rich, those flavors are prominent.

Palate: I..I…don’t know. It’s weird. There is that first wash of peat and scotchy-scotch malt, but it finishes like coffee to which too much milk has been added–not as bracing and engaging as it could be. And then cherry bitters, and a little red-hot candies. Then chocolate, but it doesn’t follow through. It tastes like the smell of the paper in which unsweetened chocolate is wrapped. Maybe it’s me, but I find this just doesn’t ring my bell. Your mileage may vary and my tastes do tend to verge from single malt, but I don’t find this interesting or invigorating. I find it confused and a little lost and I just want to say, “There, there, give it time.” It doesn’t know what it wants to study in college, so it’s trying a little of everything before it decides.

It tastes confused, like when Waze sends you in a weird direction despite there being no traffic on the route you know is more direct.