Editor’s Note: This whiskey was provided to us a free sample to review by the party behind it. The Whiskey Wash, while appreciative of this, did keep full independent editorial control over this article

The Quiet Man is a very new label on the Irish whiskey world stage. This release by St. Louis-based Luxco partnered with Derry, Northern Ireland’s Niche Drinks is currently available in a 4-year-old (though the label bears no age statement) blended malt version, which I already reviewed, and this 8-year-old single malt variety. The Quiet Man 8-year-old single malt is bottled at 40% ABV (80 proof) and retails at $49.99 per 750 ml bottle. These whiskies can be found in markets in Germany, South Africa, Canada, Ireland, and as of January 2016, the United States.

Not satisfied with being the first whiskey bottled in Derry in over a century, there are plans to construct and operate a distillery and visitor center in the Northern Irish city in order to provide The Quiet Man with its own in-house supply of whiskies for their future blends and single malts. The distillery will be the first operating within the city in over 150 years. As of the time of this review, Luxco does not publicly disclose the source of the whiskies which go into either of their current releases. 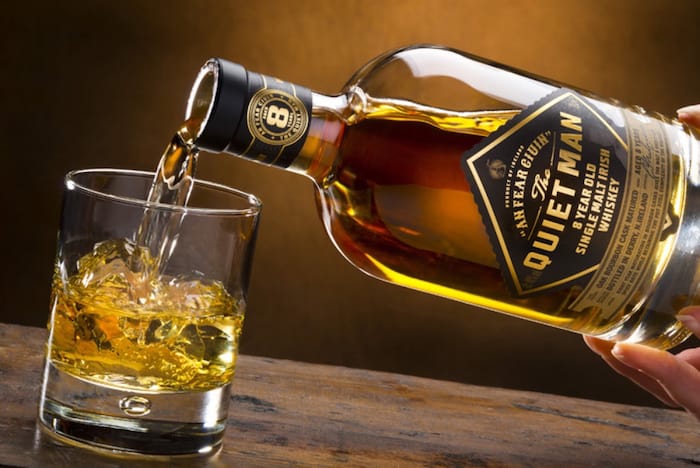 Finish: Surprising amount of spice towards the finish, mostly clove and allspice with a hint of cinnamon. Medium to light burn which fades nicely, if a little quickly.

I generally try to taste any whiskey on its own merits and do my very best to avoid drawing comparisons, even between label mates. That being said, the comparison between this 8-year single malt and its younger, blended sibling is crying out to be made. In a word, the difference is significant. There is quite a lot more going on in the 8-year-old version of The Quiet Man. The flavors and aromas provide much more of a punch, from the oaky nose to the apricot-heavy palate to the spicy finish.

It would be a mistake to assume this whiskey is a mere variation on a theme. There is a complexity here which is interesting, while the dram maintains a friendliness and general approachability I have come to expect from the vast majority of Irish whiskies.