Editor’s Note: This whiskey was provided to us as a review sample by Wolf’s Spirit Distillery. This in no way, per our editorial policies, influenced the final outcome of this review. It should also be noted that by clicking the buy link towards the bottom of this review our site receives a small referral payment which helps to support, but not influence, our editorial and other costs.

From Wolf’s Spirit Distillery comes Puncher’s Chance, a Kentucky Straight Bourbon launched mid-pandemic in September 2020. Wolf’s Spirit operates out of Eugene, Oregon and was founded in 2017 by Umberto Luchini, a 17-year veteran of Campari.

Luchini took a chance on launching Wolf’s Spirit Distillery after walking away from his secure position as CMO for Campari America. In 2017 Luchini, along with master distiller Ben Green, created Blood x Sweat x Tears and went on to develop popular Tom of Finland Organic Vodka.

Wolf’s Spirit followed up those two productions with Puncher’s Chance Kentucky Straight Bourbon Whiskey. Citing Mike Tyson as inspiration for Puncher’s Chance, Luchini believes that “a split second can change the outcome of not just a boxing match, but any fight. Puncher’s Chance is for the underdog: no matter how dire the situation, he or she will pick themselves back up. They are the ones who persevere long enough to eventually land that one punch that matters.”

Despite being a young, independent brand, Wolf’s Spirit is not struggling to be seen. Four months after the release, the distillery shipped over 10,000 6-bottle cases and 30 private barrels at cask strength of Puncher’s Chance Kentucky Straight Bourbon. Now, in 2021, what will be their first full year in business with the Kentucky bourbon, Wolf Spirit CEO Bradd Levitan says the brand is on track to place amongst the “fastest-growing new bourbon brands from an independent producer.”

Puncher’s Chance enjoys endorsement from iconic sports and entertainment announcer Bruce Buffer, the “Voice of Mixed Martial Arts.” In an Instagram post, Buffer showcased a video of the production of Puncher’s Chance, reporting his collaboration with the brand and calling it “the finest Kentucky Bourbon I have ever tasted.” With Mixed Martial Arts (MMA) being the world’s third most popular sport, Puncher’s Chance is lucky to have a voice like Buffer’s spreading the word to his one million Instagram fans.

Puncher’s Chance is a blend 4-, 5-, and 6-year-old Kentucky straight bourbon. It comes in a hefty black bottle with a unique stenciled tiger and striking font. The bourbon is both accessible and delightful. 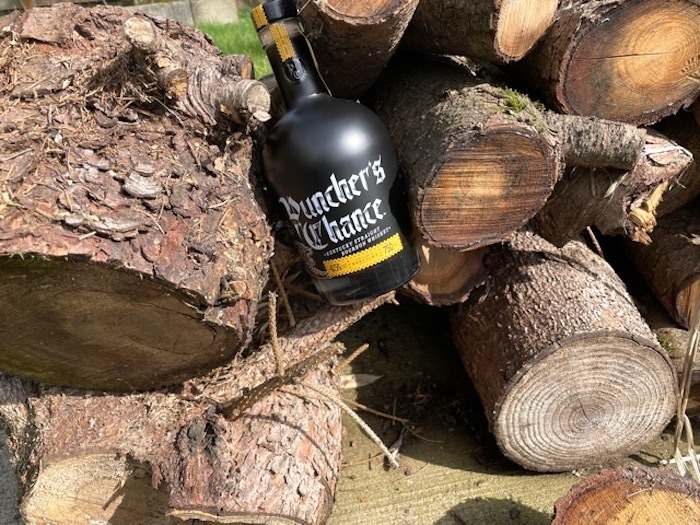 Palate: The bourbon smells sweeter than it is on the palate. Citrus peel and the slight bitter of cocoa powder give way to a smooth, spiced finish.

As stated above, this is an incredibly accessible bourbon. I would recommend Puncher’s Chance to kick the door in for someone brand new to bourbon. The subtle blend gives off just enough of the wood and the sweetness on the nose really mellows out in the glass to a nice smooth finish.