Editor’s Note: This whiskey was provided to us as a review sample by Proof and Wood. This in no way, per our editorial policies, influenced the final outcome of this review. It should also be noted that by clicking the buy link towards the bottom of this review our site receives a small referral payment which helps to support, but not influence, our editorial and other costs.

Dave Schmier co-founded Redemption Rye a decade ago, and quickly went about sourcing whiskies, building a brand and working with distributors around the country to get product to market. By 2015, he and fellow Redemption Rye founder Michael Kanbar had gone full circle from startup to acquisition target – eventually selling the company to Deutsch Family Wine & Spirits.

Schmier, though, wasn’t done sourcing spirits, building brands and working with distributors. He went on to found Proof and Wood Ventures, which now includes a portfolio of rum, malt liquor and, of course, whiskey brands. The whiskies run the gamut from entry-level Deadwood and Tumblin’ Dice bourbon and Roulette Rye to some of the top-shelf expressions in the DC Collection.

But a 25-year-old light whiskey is a wild card even for a company like Proof and Wood. It wasn’t really part of the master plan Schmier had for the company.

“This fits under the umbrella of having fun and happening to find really interesting whiskey,” he said to me. “You don’t see too many American whiskies of that age, of any type. And then there’s the fact that light whiskies are a Frankenstein category.”

Light whiskey is a category developed by the spirits industry in the late 1960s and rolled out to consumers starting in the ’70s. It was a defensive response to vodka, gin and lighter imported whiskies (Scotch, Irish and Canadian) that were increasingly stealing market share from domestic bourbon and rye at the time.

Light whiskey is distilled and barreled at a higher alcohol content than bourbon and rye, stripping it of much of the whiskey flavor until it more closely resembles neutral spirits. It’s also aged in used and/or uncharred barrels. The combination of these things means light whiskey typically absorbs fewer compounds from the wood and, by the time it’s proofed down and bottled, provides a light and easy-going drink the industry thought consumers wanted. (Four Roses Premium, a light whiskey, marketed itself in the 1970s as “The taste that underwhelms.”)

The industry was wrong about what consumers wanted, as it turns out. Light whiskey largely flopped as a category, and many modern whiskey drinkers have never even heard of it. These days, the whiskey industry has gone entirely the other direction – glamorizing big and bold expressions with plenty of wood flavor.

But that doesn’t mean there wasn’t a lot of light whiskey being made and put into barrels at various times in the past. Much of it was used in Canadian whiskies or other blends over the years, but there’s still some sitting in warehouses. That means, for someone like Schmier who sources rather than distills his own spirits, there are opportunities to find very old and very interesting lots of light whiskey.

In the case of 100 Seasons, Schmier says he took 25-year-old light whiskey from Indiana-based MGP Ingredients, put it into rye barrels for about eight weeks and then rested it in steel for two more years.

With the rye-barrel finishing, he says, “I was trying to give it a nice color, give it a little more body. We achieved that a little, but I didn’t want to push it too far and damage the whiskey.”

He said it’s something whiskey aficionados might be interested in; different from anything they’re likely to find at the neighborhood liquor store. 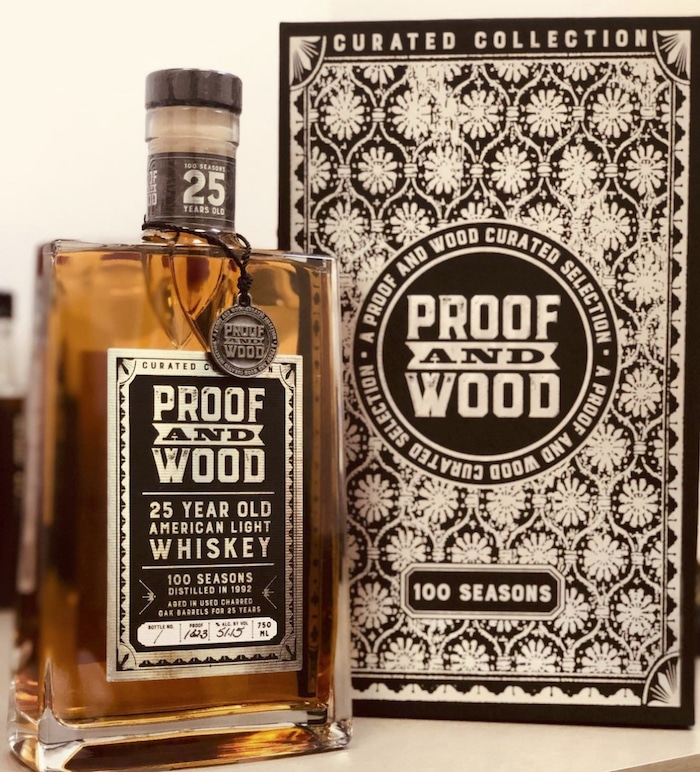 Nose: Butterscotch, caramel, honey. But some rye spice shows up, too. A slight fingernail-polish scent comes through.

Palate: Any bourbon aged for 25 years is going to be an intense experience. That much time in new oak leaves a lasting imprint – and, many argue, is likely to overwhelm most bourbons. But light whiskey is a different animal. The used barrels and high-proof spirits put into them guarantee that, even after two-and-a-half decades, it’s still smooth and easy. Vanilla, caramel, toffee and wood spice, the result of the oak barrels, are all evident. But they play relatively minor notes, and leave room for floral accents, too. Ultimately, I also taste vanilla cream sauce over fresh fruit.

This is super nice whiskey. Light whiskey gets a bad rap among serious drinkers, and justifiably so given its history. But the truth is, some of it has aged very well. This batch certainly has. It’s an expensive oddity, and most people probably aren’t going to take that big of a flyer on something they don’t know. Those who do, though, aren’t likely to be disappointed.