There’s no doubt that PM Spirits has a passion for truly artisan spirits. Founder Nicolas Palazzi grew up in France with grandparents who made their living making wine in Bordeaux. There he learned to appreciate fine flavors, especially Cognac. Fast forward to 2018, and Palazzi has built his reputation on finding spirits that are made sustainably, by hand, and also taste fantastic.

PM Spirits bottles some spirits under their own branding, and facilitates an avenue for curated small producers to gain distribution in New York and nationally. They tend to work with products that are at full proof and pulled from a single cask, and specialize in Cognac, Armagnac, brandy and eau de vie, but their variety of offerings is extensive and unique. The company is refreshingly transparent about their products.

They’re so transparent in fact, the label on PM Spirits’ Mic.Drop. spells it all out for you: distilled in 2009, bottled in 2017, made by MGP and bottled by dumping together full-proof single casks. The operation took all 20 casks of the high-rye bourbon produced in this particular batch – 3,358 bottles – and released it as a PM Spirits project, available while supplies last.

The company didn’t just take the first whiskey they were able to source, though. They explained they didn’t want to take a mediocre whiskey, slap an artisan label on it and make up some backstory about the aging process just to add the spirit to their repertoire. So, instead they took samples until they found the right one. When founder Nicolas Palazzi tasted this batch, he thought it was too good to be true, so he travelled to Kentucky and tasted whiskey from every single cask. He loved it so much, and was so impressed with the consistency between each cask, that he bought all 20 of them.

Thus, Mic.Drop. came to be, with its backstory right there on the label to send a message that “a bottle of booze shouldn’t have to front on its audience. Instead, it’s got to sidestep the hype, take center stage, and let the performance speak for itself.” 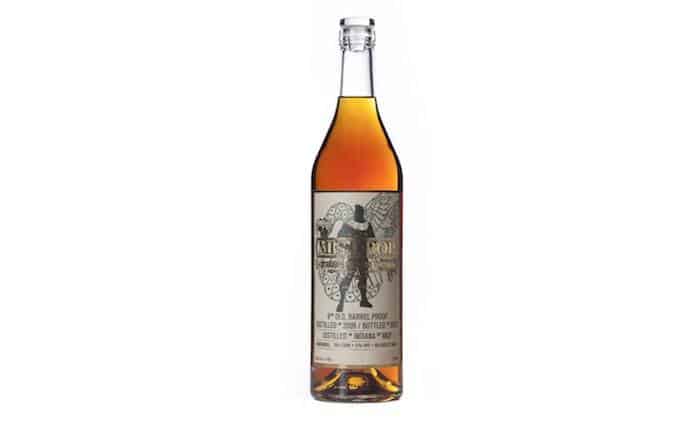 Appearance: The color is an orangey amber, not light but not dark. The legs coast down my glass in a uniformly striped pattern.

Nose: Notes of caramel and spiced apple hit first. Sweetness and dark grainy notes also stand out, with some hints of brandy and coconut.

Palate: Complex flavors provide a rich, sensual experience when drinking this whiskey. It leads with toasted banana, followed by rich caramel. The spicy rye flavors come in on the back, linger for a bit and then melt away into more caramel sweetness. There are also notes of spiced apples, cloves and maple. This is definitely a whiskey I would drink neat or with a few drops of cool water to open up more floral notes.

Mic.Drop is a no-nonsense approach to bourbon. It's traditional, but complex and has a defined character found in the apple and banana notes. The rye hangs around long enough to be appreciated, but not long enough to overstay its welcome. Complete with a balanced punch of sweetness, this company's approach to an American classic will strike a chord with those who love bourbon and American tradition.