Editor’s Note: This whiskey was provided to us as a review sample by OOLA Distillery. This in no way, per our editorial policies, influenced the final outcome of this review.

Seattle based OOLA Distillery released its newest bottle in its Discourse Series at the end of November, 2018. While the first three were the Three Shores World Whiskey, Three Shores Black Label, and Smoked Whiskey, this expression, Discourse C, is a Cabernet barrel finish of their flagship Waitsbourg Bourbon. The four grain mash bill includes corn, rye, malted barley, and organic Washington winter wheat.

The Discourse Series strives to do something innovative and unconventional, while having conversations about traditional whiskey making practices. Like a scientist would test a theory, OOLA Distillery is experimenting with whiskey. The end results have led to several accolades, while also selling out of the special releases.

OOLA Whiskey Discourse C, which takes the 93-point rated Waitsbourg Bourbon and puts it in 100-point rated Washington Cabernet Sauvignon barrels, has sold out at the distillery. While the use of French oak barrels in whiskey making has been around, finishing whiskies with non-fortified wine has been a recent trend. Deciding what wine barrels to finish whiskies with is all about trial and error. So far, Kirby Kallas-Lewis and his team at OOLA Distillery have been succeeding. 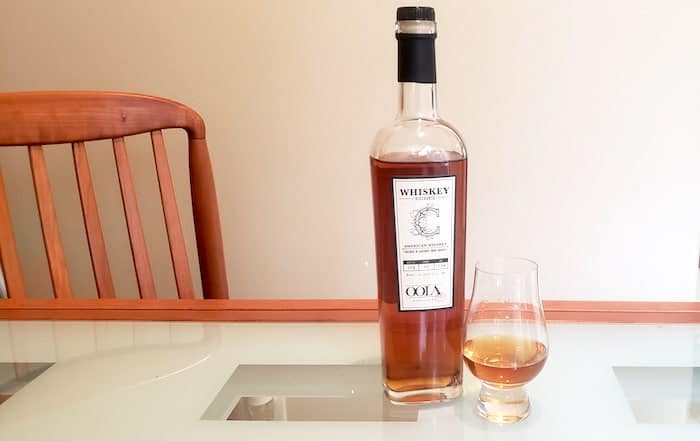 Nose: Rich with cherry and marzipan. Bright lemon zest rises above the slightly antiseptic and rubbing alcohol smell. Sweet plum and raisin notes hit on the back end.

Palate: It is only a tad hot from the proof and rye content, but the big surprise is the extremely soft and airy mouthfeel. This whiskey is like a cloud in a glass. Maybe it is the Canadian in me, but I taste a lot of maple with brown sugar. A lovely amount of pear also comes through. A slight mintiness swirls about heavy-handed stone fruit.

The OOLA Whiskey Discourse C is a charming whiskey with a surprising mouthfeel. The maple and brown sugar notes were not overpowering and the whiskey is not overtly sweet. Instead, it feels quite balanced. The heat from the proof can be dealt with via a little water, if needed, but it's quite fine without water. Recommend you get a bottle if you can find it.