Old Tub Kentucky Straight Bourbon Whiskey comes from one of the giants of the whiskey world. In 2016, we wrote about their 112th rickhouse in all its massive glory. Now, they operate with at least 126 aging facilities and build them as large as Kentucky law allows. In 2019, they lost around 45,000 barrels worth of aging whiskey to a fire, but that only accounted for around 1% of their entire stock. That is a lot of whiskey. Seriously.

We’re talking about the James B. Beam Distilling Company, maker of the number one selling bourbon in the world. They mostly make one thing, and they make a lot of it. However, somewhere in all those millions of gallons of Jim Beam Bourbon, they managed to make room for a few other whiskies. These may include some really beautiful expressions of Booker’s or one of the Knob Creek labels. Available for several years only at the distillery we now have a revival of what you could potentially call the ‘original’ Jim Beam Bourbon – Old Tub.

Old Tub is a bottled in bond, non-filtered bourbon. The recipe is supposedly what inspired, or at least set the path for, Jim Beam Bourbon. The story goes that back in the mid to late 1800s, when prohibition had yet to shut things down and glass bottles were yet to be the industry standard, folks would come fill up their jugs of whiskey from a tub that held the current stock.

In 1880, the Beam family began marketing a bottled product called ‘Old Tub’ in tribute to the aforementioned system. It wasn’t until after prohibition, in 1943, that James B. Beam changed the name of Old Tub to Jim Beam and began sky rocketing the brand to the podium of success that it is today.

If you ask me, the Jim Beam we have today and this Old Tub Bourbon are drastically different beasts. This is just proof that change happens. To meet demand, consumer preference, what have you, Jim Beam bourbon adapted to what it needed to be. I’ll be the last person to argue that they did anything wrong, because they have a bottle on the backbar of nearly every place in America with a liquor license.

However, this Old Tub come-back expression is something special. It’s affordable, it’s unadulterated, and it is delicious. It reminds me that even if Jim Beam white label isn’t my go to pour, it comes from a world class distillery that knows how to make whiskey really, really well. 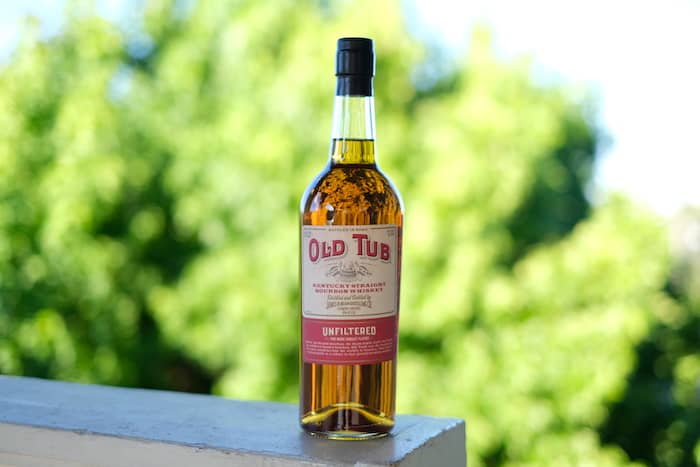 Palate: A bit of chalk and slight heat which dissipates quickly and leads to green anise and light butterscotch. Clove, tobacco, vanilla and an appropriate amount of that sour mash flavor that reminds you where it comes from. There’s oak, honey and grain all balanced together. Medium to long finish.

Old Tub is perfect. It is indicative for what Bottled in Bond should be. It sets a baseline for all others to go forward from. I don’t always factor price into the final rating heavily, but to have this available for less than $22 is exceptional.

It hits all the marks – balanced, cost efficient, high proof, sippable and good in cocktails. This would be my well whiskey in a cocktail bar hands down. I appreciate the story, the packaging and the final product. I would regularly keep this bottle in my home bar for a base level, high quality bourbon.