Editor’s Note: This whiskey was provided to us as a review sample by James E. Pepper. This in no way, per our editorial policies, influenced the final outcome of this review.

Robust. That’s what I’ve come to feel about whiskeys from James E. Pepper. Full flavored and unapologetic. I like it that way. Working at a bar, it’s good to have those old favorites that you can count on for a guest. Granted, every person that walks through the door is different, so it’s particularly handy to have a mixed bag of go-tos in your back pocket.

The iconic brand began in 1780 and ceased production in 1958. Since then, it has been revived by owner Amir Peay and began distilling once again in December 2017. The whiskeys currently featuring the name are still sourced from MGP, but it’s exciting to see what they come up with. Speaking of MGP, Peay hired one of the distillers from said producer as his master distiller, which was a great idea, as consistency can be a concern when switching from sourced to making your own juice.

Finest Kentucky Oak is a limited-edition straight rye whiskey; it starts with the distillery’s standard rye whiskey, which then undergoes a secondary maturation for an undisclosed length of time in new barrels made from Kentucky oak. The staves for these barrels were air-dried for 24 months—substantially longer than the standard six-month air-dry—and then given a light char.

“FKO,” as the distillery calls it, was first released in the summer of 2018, and is “one of the most critically acclaimed offerings from the Pepper Distillery,” earning a double gold at the San Francisco World Spirit Competition, among other accolades. 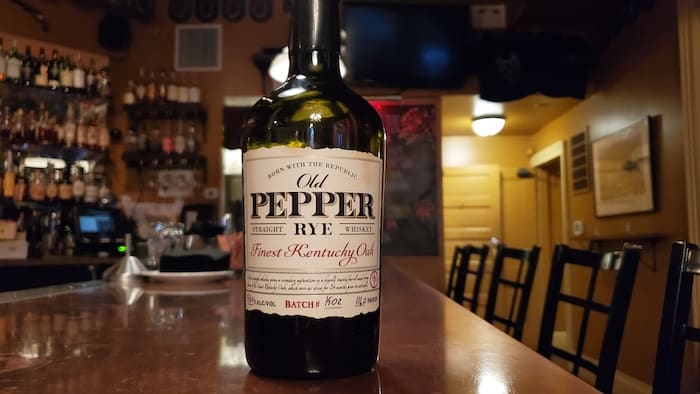 Nose: Heat up front, rye spice, and fruit. The fruit element is fairly complex, and is somewhere between candied orange and roasted peach. Perhaps a bit tough to imagine, but there it is.

Palate: The signature James Pepper Rye spice, followed by orange marmalade and graham cracker. The whiskey has a medium body with a pleasant and lingering finish.

I call this a win. The classic James E. Pepper flavors amplified by a slightly higher proof and secondary aging. It's great neat or with a couple of ice cubes. Also, as a bigger whiskey, would definitely play nice in cocktails. The Old Pepper is significantly more expensive than their standard rye, but certainly worthy as a treat to yourself or as a gift to a whiskey fan.