Editor’s Note: This whiskey was provided to us as a review sample by Old Man Liver. This in no way, per our editorial policies, influenced the final outcome of this review. It should also be noted that by clicking the buy link towards the bottom of this review our site receives a small referral payment which helps to support, but not influence, our editorial and other costs.

The label of Old Man Liver American Whiskey states that the whiskey is “a little spicy and not too sweet, like all great sex,” as if attempting to stand out as some kind of sassy spirit brand. That and the campaign showing the titular “Old Man Liver” with a shiny suit, cowboy hat, and his hip kicked out can easily distract from the fact that this is whiskey, not an episode of a satirical TV show.

Touting itself as the first pandemic-born 90 proof whiskey, Old Man Liver American Whiskey is sourced from Two Trees Distilling Company. The distillery is buried deep in the Appalachian Mountain country and claims the ability to produce spirits that taste like they’ve been aged for years over the course of a single day using an accelerated aging process that mirrors of the natural process of whiskey aged in oak barrels. From my tasting today, I can’t fully agree with that claim.

Information about Old Man Liver American Whiskey tends to focus on Old Man Liver himself. The website is like a personal ad for the man, who is a musician and the (again self-proclaimed) “World’s #1 Most Offensive Writer.” With so many self-proclamations, it’s hard to get a straight answer about where this whiskey comes from or the reason for its existence.

The official press release for Old Man Liver American Whiskey is as follows: “Old Man Liver and his Old Lady were having a day of debauchery, their favorite pastime, drinking on Fremont Street in the neon-lit old Strip area of downtown Las Vegas. After multiple strip clubs, bars, and casinos, OML was drunk on the ground in front of a White Castle. He proclaimed his love for good old American whiskey and lamented how the drink in his hand wasn’t strong or flavorful. That’s when his Old Lady decided OML MUST have his own whiskey. After almost a year of overindulgence and trial and error in order to get the perfect flavor, OML and his Old Lady’s dream became a reality.”

In a day and age where more and more celebrities are putting their names and faces on the labels of spirits, it’s kind of funny to see someone who is virtually unknown act like he is a hot commodity. That said, it may add some quirky appeal that Old Man Liver thinks so highly of himself and this new whiskey expression. Overall the tasting wasn’t half bad for a whiskey brand that compares itself to sex. 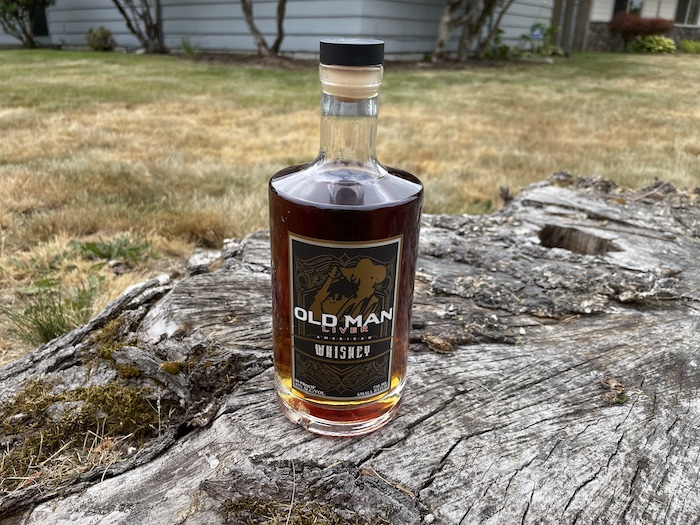 Nose: The nose is mild with tobacco and smoke, like meaty brown sugar BBQ.

Palate: Sweet and a bit spicy, the whiskey lacks real intricacy. Perhaps it’s the streamlined aging process, but the whiskey doesn’t have any sort of unique flavor profile–though it isn’t unpleasant, just simple.

This is a brand that seems more focused on fun than flavor profile. Old Man Liver wanted to produce a pandemic whiskey and he did, and the outcome is a spirit that will mix well in one of the cocktails the website suggests. Old Man Liver can now add whiskey maker to his long list of self-proclamations, but the buzzwords and fanfare don’t ultimately do much to elevate this middle of the road whiskey.