Fans of the Kingsman series of action adventure movies know the next release, The Kingsman: The Golden Circle, is due out in September. For bourbon fans, however, a more interesting backstory came in May, when Old Forester released about a dozen cases of its newest bourbon, The Statesman, named after the American secret service-esque counterparts in the upcoming movie. The public release will happen in August, during what surely will be a well-marketed run-up to the movie premier.

The Statesman is a 95-proof addition to Old Forester’s Whiskey Row Series, a four-bottle roster of wide-ranging proof line extensions two its longstanding 86- and 100-proof offerings. The company held a large press conference to unveil the new bourbon, partly because the movie purportedly features many mentions of its hometown of Louisville, Kentucky, as well as the distilling industry. Brown-Forman, of course, was consulted on that part of the script.

In the movie, the men of the Statesman group run a whiskey distillery as a front for their covert, good-guy operations. Old Forester stuck its own toe into the somewhat covert waters by releasing the whiskey discreetly in small allotments around the city just after the press event. Even the brand’s master taster, Jacquelyn Zykan, claimed she had no clue where around town they’d show up. Fortunately for the Whiskey Wash, our connections came through and we had bottles in less than a day. 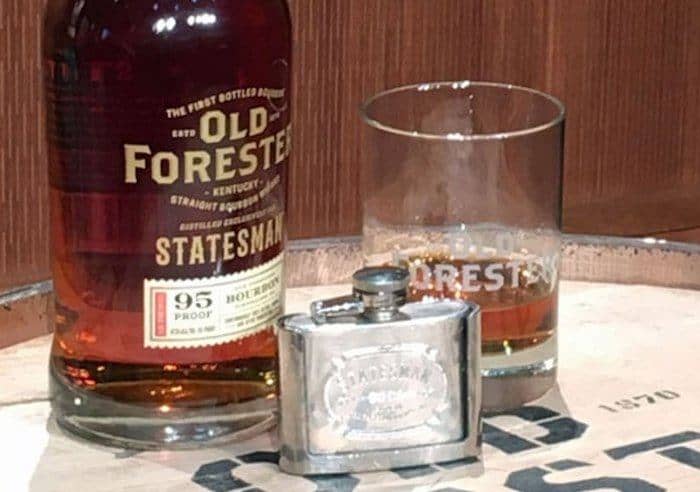 Vital Stats:  Made from Old Forester’s longstanding rye-forward mash bill and a mingling of 4- to 6-year-old barrels plucked from warmer sections of the distillery’s heat-cycled rickhouses. Suggested retail is $55.

Nose: Pleasantly mustiness followed by young oak and campfire. Rye grain emerges alongside toast with a back note of deep-woods greenery. With glass time and some swirling, fruit emerges to balance the aroma before delivering a tad of acetone, though it’s not unpleasant.

Palate: Stone fruit, cooked cherries, light oak and toasted marshmallow move quickly to the midpalate; all pleasant. But the finish is dry as tannins quickly takeover, and closed-mouth exhale through the nose makes the final flavor a touch ashen.

Like many Louisville bourbon drinkers who view the spirit the unofficial locals’ choice, I say there’s hardly a better daily-drinking bargain on the market than its 100 proof Signature expression. It’s my baseline for all B-F liquids. Of its Whiskey Row Series, the pinnacle (for me) is its 120-proof Prohibition expression, an orotund whiskey in every sense (exactly what all Old Forester barrel pickers want to see bottled, not the 90-proof renditions insisted on by the distillery). Since I sometimes can find Signature for the incredible price of $21 in 1-liter bottles and Prohibition at $60 for a 750ml, I’m not eager to pay $55 for Statesman. For my palate, it lacks the power of Prohibition and the more interesting edges found in Signature.