Editor’s Note: This whiskey was provided to us as a review sample by Brown-Forman. This in no way, per our editorial policies, influenced the final outcome of this review. It should also be noted that by clicking the buy link towards the bottom of this review our site receives a small referral payment which helps to support, but not influence, our editorial and other costs.

You shouldn’t have, really.

It’s just too much

How did you know?

You see, today is my birthday. I sit down to write my latest review, and what do I behold before me? Old Forester’s Birthday Bourbon 2021 release. I tell you, this sure is flattering, and they sure know how to make a guy feel special.

…after further research, it turns out that this release has nothing to do with my birthday and is actually named in honor of George Garvin Brown, the founder of Old Forester and the Brown in Brown-Forman. I guess that makes more sense.

George Garvin Brown’s birthday was September 2, and since 2002, Old Forester has released a vintage-dated, hand-selected bourbon from one particular day of production in honor of their founder’s birthday. This bourbon has ranged in age from 9-14 years old, and from 90 to -105 proof. The uniqueness of the release has made the occasion, the finding, and collection of the allocations an annual event. Since these particular vintages will never be released again, each year is often compared and contrasted with previous ones.

The release and the September 2 date also unofficially serves as the kick-off of Bourbon Heritage Month which, since 2007, has been a monthlong celebration held every September to honor the heritage of distilling the United States’ “Native Spirit” throughout the country.

In addition to the uniqueness of the release and the parameters by which each year is selected, the bourbon fan also gets some rare insight in each Birthday Bourbon. For the 2021 release, we know that each barrel was filled on April 16, 2009, and they were  scheduled to be dumped in mid-June 2021. I’ll bet we can look back and think of where each of us were, and where those 12 years have taken us since. The batch size was 119 barrels, and the entire batch was aged together in Old Foresters’ warehouse G on the 8 floor.

Well, cheers to George and I’s birthday, let’s get tasting. 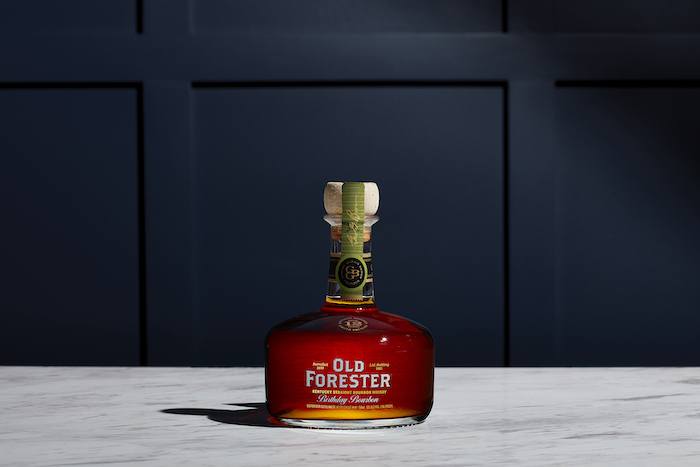 Appearance: Clear, with a gold to burnt sienna color. A deep body that holds the sunlight when observed through a tasting glass. The viscosity forms wide rivulets that cling to the side after a swirl of the glass.

Nose: Notes reminiscent of toffee and caramelized sugar on first inspection. Then it opens up with berry compote and marmalade characteristics, plus touches of oak and pecan.

Palate: The full-bodied mouthfeel is noticed right away. A deep, chewy character and a balanced complexity leaves space for each note to develop on its own – citrus to cocoa and then a spectrum from raisin to mint. The lengthy warm finish is slightly dry.

All kidding aside, Birthday Bourbon releases are something I look forward to each year. Tasting this year reminds me of why that is. I’m really enjoying the mint and cocoa aspect of this one and I look forward to comparing it to previous years. It may not be released for my birthday, but this guy feels special nonetheless.