We have written previously about Old Fitzgerald’s Bottled in Bond series, recently reviewing the 13-year and really digging it. Old Fitzgerald has promised a new release each spring and fall; the Fall 2019 version is the fourth national release of this bottling, and it’s 15 years old, this time.

What, exactly, does bottled in bond mean? Think of it like a boozier Good Housekeeping Seal of Approval. (Do they still do that, actually? And am I totally dating myself? Yes, and yes.)

On March 3, 1897, Congress signed the Bottled-in-Bond Act. This was in response to many “straight” whiskies sold with additives not mentioned on the bottles. Those awesome additives could be anything from molasses to formaldehyde—not a component you generally want in your glass. The law mandates that bottled-in-bond whiskies must be the product of a single distillery from a single distilling season, aged no less than four years, and bottled at 100 proof.

Heaven Hill, parent company of the Old Fitzgerald brand since 1999, explains the brand’s pedigree pretty well: It was first registered by S.C. Herbst, and eventually sold to Julian P. “Pappy” Van Winkle during Prohibition. Pappy then moved production to his distillery. Then at the end of the 20th century, Heaven Hill bought the brand and started distilling at the Bernheim Distillery in Louisville.

So the Fall 2019 version marks the oldest version of this bottling, at 15 years. It is composed of barrels produced in September 2004 and bottled in November 2019. Like the other versions, this also comes in an elegant glass decanter inspired by an original 1950’s Old Fitzgerald diamond decanter, with an equally elegant retail price of $150. 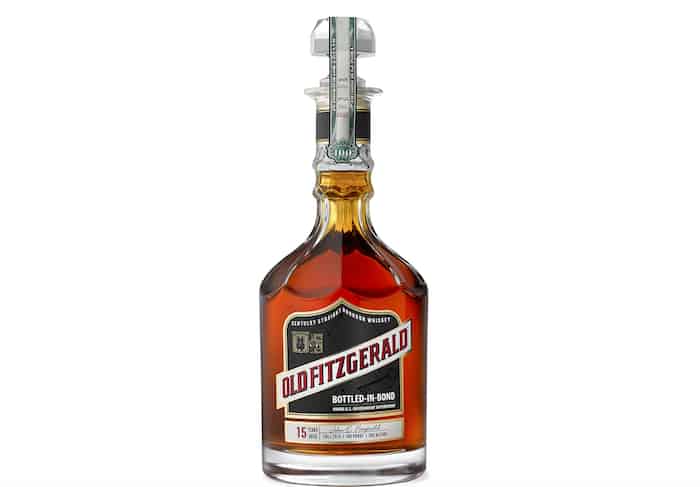 Vital stats: 100 proof, aged 15 years, Kentucky straight bourbon, about $150 for 750 ml (assuming you can still find it at that price!). No mash bill available, though this is a wheated bourbon: made with wheat as the secondary grain to corn instead of rye.

Appearance: In the glass it shines. Quite glossy. Like a glossy toffee. We need a little radiance in our lives lately, yes? This whiskey has it.

Nose: Nothing astringent on the nose. Sweet, but like a balanced baking sweetness: banana walnut bread. Nutella. Oatmeal cookies. Browned butter and caramel.

Palate: It starts smooth, but ends up a little tickly, but not terribly so. Like cinnamon, as if cinnamon could pop. You know the best part of the tray of brownies? It’s the end piece. There is softness and chew but also give. It’s the best part because there’s sweetness from the brownie but then you get some savory from the texture of the end piece. This whiskey is like that. It’s unctuous without being fussy.

This is definitely a keeper. (Again, if you can find it. At its original price. While everyone is sequestering themselves and drinking.) I have not tried the 13-year to compare but this definitely tastes like a whiskey that was worth the wait. Not sure if the next one they put out will be older or younger—but with this track record, I’d expect good things if I were you.

Read More Whiskey News
Whiskey Review: Hooten & Young American Whiskey
5
User Rating 3.42 (12 votes)
Sending
101
Shares
6k
Views
Share on FacebookShare on TwitterGet Our Newsletter
Cheers to the Dads! Personalize a bottle of his favorite whiskey to create a modern gift for the modern man. Use code: FATHERSDAY20 for $20 off your next order of $100 or more at ReserveBar