Editor’s Note: This whiskey was provided to us as a review sample by Old Camp. This in no way, per our editorial policies, influenced the final outcome of this review. It should also be noted that by clicking the buy link towards the bottom of this review our site receives a small referral payment which helps to support, but not influence, our editorial and other costs.

Upon receiving this bottle of whiskey, I’ll admit to not knowing entirely what to make of it. I generally have apprehension when it comes to flavored whiskeys, truth be told–and then we throw in the fact that it is a celebrity-produced whiskey.

The celebrities I speak of are Brian Kelley and Tyler Hubbard from the country music group Florida Georgia Line. As the story goes, the two friends and partners share a passion for music (of course) and whiskey. In 2016, Old Camp Peach Pecan whiskey lands on the scene. The flavors combined are said to be a nod to both of the states in the name of the band. The intent is to have an easy sipping, yet interesting and entirely unique whiskey.

The juice itself is a sourced two-year-old American whiskey aged in charred new oak barrels. From there, the whiskey is infused with essences of peach and pecan, of which I am curious as to the process involved. The whiskey is diluted down to an approachable 35% ABV, so that naturally someone can have a second pour without worrying too much about too much intoxication.

The name Old Camp is a nod to the band’s crew or “camp.” Before a big show, it is said that there’s a group cheers of probably whiskey. “This ritual is a huge part of FGL and we wanted to develop a drink that feels true to who we are, our roots and the vibes we like to create.”

Whiskey from these two has met with large successes, allowing the operation to expand into a four-year-old bourbon called Wolf Moon as well as an American blended whiskey. 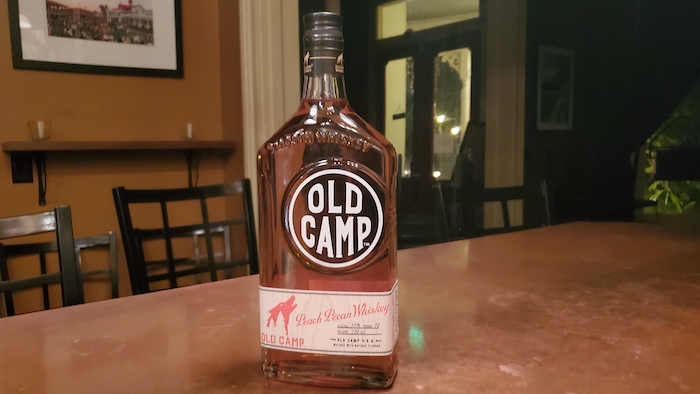 Appearance: A golden orange. Just swirling the whiskey in a glass, you can tell that it’s quite viscous and there were a lot of legs going on along the side.

Nose: Very sweet. You immediately get the impression of peach candy mixed with a touch of nectarine. I was hoping to pick up aromas of the pecan element, but the peach simply dominated.

Palate: It was simple and also a conundrum. As per the nose, the peach element took center stage in the beginning and then it got a touch weird. In the middle there is a distinct flavor of watermelon hard candy and then in the finish, it circles back to its namesake with a finish of toasted pecan. It’s a pretty full bodied whiskey, so the finish lasts a while.

First impression was, huh, that's not terrible. Second impression was that I'll never drink this straight, though its possible application in cocktails could be a good thing, especially in small doses. It could also be useful in the kitchen as an ingredient to a vinaigrette or some kind of sauce. Maybe even glaze a pork chop with it. So yeah, not terrible.