Editor’s Note: This whiskey was provided to us as a review sample by Oak & Eden. This in no way, per our editorial policies, influenced the final outcome of this review. It should also be noted that by clicking the buy link towards the bottom of this review our site receives a small referral payment which helps to support, but not influence, our editorial and other costs.

What is the most important aspect of creating any whiskey? Well, according to Joe and Jamie Gildenzopf, and Brad Neathery, wood is the most important aspect in creating whiskey; being important to the flavor and the color. So, while they follow standard whiskey procedures in their regular aging process, the guys at Oak & Eden patented a new finishing process for their whiskey and bourbon – in-bottle finishing.

Rather than finishing in different barrels, as is the usual standard, Oak & Eden came up with a brand new process to do the finishing after the whiskey is bottled. How do they do this? Well, they created what they call the Spire – a 5-inch spiral piece of wood inserted into every bottle of fully aged whiskey. Each Spire is spiral cut, which maximizes the surface area that will come into contact with the whiskey, and fired to specifications for each whiskey.

Oak & Eden’s first limited small batch expression was its Bourbon & Vine. It was so popular that they decided to bring it back for another edition. This bourbon whiskey is aged in American charred oak barrels for two years. Then, once bottled, Oak & Eden adds their Spire; in this case, a Spire of French Oak that was soaked in Marker Cellar’s Cabernet Sauvignon. The Spire is heated and charred to a medium toast. 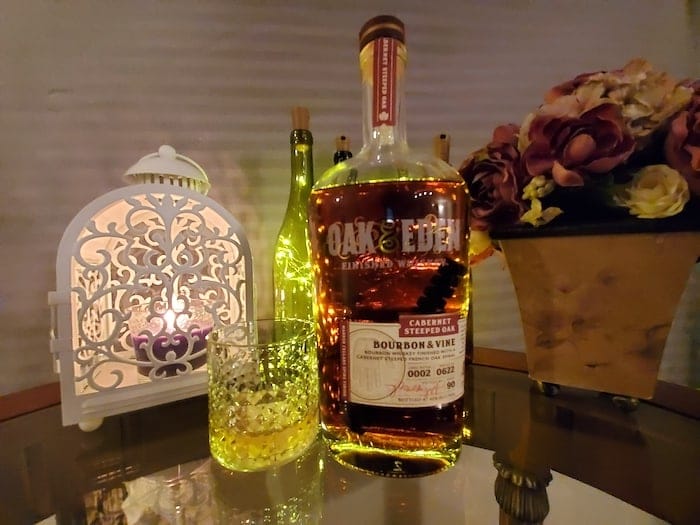 Vital Stats: This bourbon whiskey is bottled at 90 proof (45% ABV). It is aged for two years in American oak barrels. The finishing French Oak Spire is soaked in Markers Cellars Cabernet Sauvignon. It sells for about $65 per bottle.

Appearance: This bourbon is a very nice dark reddish color.

Nose: There is a very lovely scent of fruit and oak, followed by the touch of Cabernet Sauvignon from the Spire.

Palate: A very nice mix of oak and fruitiness hits your taste buds right away. The black current and fruitiness of the Cabernet Sauvignon is very apparent after that first taste.

Seeing as how Oak & Eden has created this new, patented process, it would be interesting to compare some of their other bourbons to traditional bourbons. This particular expression is very lovely, and very smooth. Even my wife, who does not like bourbon as a general rule, found this one to her taste. I think the Cabernet Sauvignon soaked Spire does seem to process more of the flavor than it may if finished in the traditional way, in former Cabernet barrels. All in all, a very lovely and smooth bourbon.