Editor’s Note: This whiskey was provided to us as a review sample by Brown Water Spirits. This in no way, per our editorial policies, influenced the final outcome of this review. It should also be noted that by clicking the buy link towards the bottom of this review our site receives a small referral payment which helps to support, but not influence, our editorial and other costs.

As this is the third installment of the O.H. Ingram River Aged Series I have had the honor of reviewing, I am happy to say I continue to be pleasantly surprised at the quality and taste coming from such a young brand.

A subsidiary of Nashville-based Brown Water Spirits, O.H. Ingram has made its mark with the delicious and unique River Series, the only whiskey aged in a patent-pending floating rickhouse. Previous expressions in the river aged series, Ingram River Aged Straight Whiskey and River Aged Straight Rye, were two outstanding tastings that managed to stand out amongst other similar expressions from distillers who have been around longer.

A great pride of O.H. Ingram is the floating rickhouse upon which the whiskey is aged. Moored at the riverbank in Ballard County, Kentucky, Ingram River Aged utilizes the gentle and consistent rocking of the Mississippi River to “provoke an interaction between wood and spirit that can’t be replicated inside a traditional rickhouse.”

A traditional rickhouse is a multi-level warehouse that stores whiskey during the aging process. Whiskey stored higher up tends to enjoy a warmer and drier climate, aging the barrel faster and producing a higher proof whiskey. Stored closer to the ground, where it tends to be cooler, the barrels age slower and at a lower proof. With the floating rickhouse, the spirit is aged in barrels that enjoy the rise and fall of waves, and the whiskey works harder during its maturation and ultimately benefits from a constant churning and stronger barrel influences.

The newest in the River Aged series is O.H. Ingram River Aged Flagship Bourbon Whiskey. This expression is pulled from barrels personally curated Hank Ingram, proprietor and founder of O.H. Ingram. “In a fleet, the flagship vessel is the lead ship. It is the highest profile and it’s the boat the others follow,” Ingram says in a prepared statement. “That’s why we’re calling this our Flagship Bourbon. It’s our cream of the crop for the year, the 10 best barrels tasted and hand selected by our team.”

The first two expressions of the O.H. Ingram River Aged Series have, not surprisingly, garnered attention and awards at the 2021 SIP Awards and San Francisco World Spirits Competition. I expect nothing less for this River Aged Flagship Bourbon, as it delights the palate and stimulates the senses. There is so much to enjoy when tasting O.H. Ingram and I look forward to the next installment from what is steadily becoming my favorite brand. 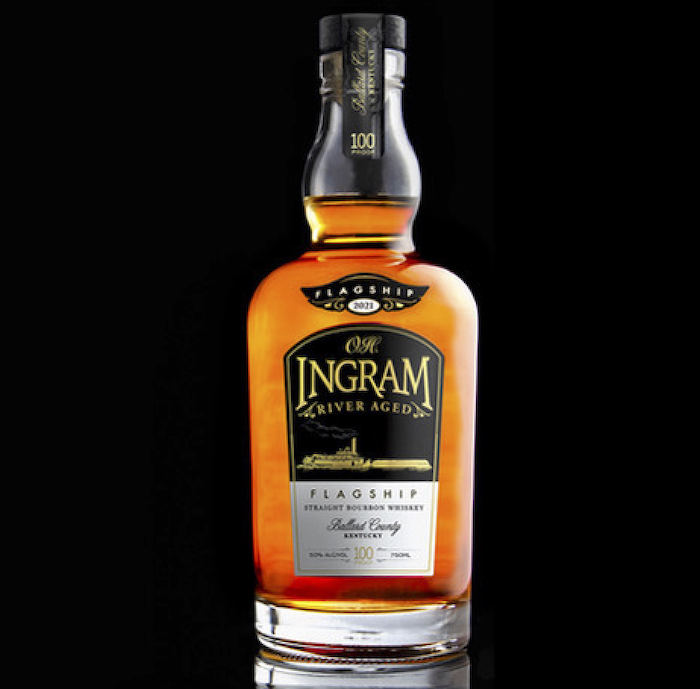 Nose: A brilliant peppery note alongside vanilla and apricot.

Palate: I enjoyed a plethora of flavors during this tasting. A slight bite gives way to a bold, bright herbal note, like strongly brewed tea. The pepper from the nose carries through and is joined with subtle woodsmoke and tarragon.

My joy at receiving this newest expression in the River Aged Series is no secret. I have nothing but good things to say about O.H. Ingram and it’s on the top of my list for recommendations. I will enjoy this whiskey as a sipper at the fireside with a good book and a record on the turntable.