Editor’s Note: This whiskey was provided to us as a review sample by New Holland. This in no way, per our editorial policies, influenced the final outcome of this review. It should also be noted that by clicking the buy link towards the bottom of this review our site receives a small referral payment which helps to support, but not influence, our editorial and other costs.

Craft brewers should make wonderful distillers. The creative process if much the same. If you stop the beer making process, you end up with a distilled spirit of a sort. It is what happens once you change gears that is important. The steps it takes to make a whiskey requires discipline, creativity, and the desire to immerse your customer in the palette of Americana.

Established in 2005, New Holland Brewing has built a strong following in Michigan and mass market appeal. Their beers and spirits are available throughout the United States and are fine creations especially if you like more malty, flavors such as Scotch Ales. They have tasting rooms, and restaurants and are on their way to building a franchise-able brand.

For this review I was provided with a sample of their Beer Barrel Bourbon. The labeling is eye catching and the idea of building the flavor of your bourbon off of your tried and true product, the Dragons Milk beer that the bourbon finishes its aging in, makes a lot of sense. Where they miss the mark is in the execution of a balanced and inviting spirit. 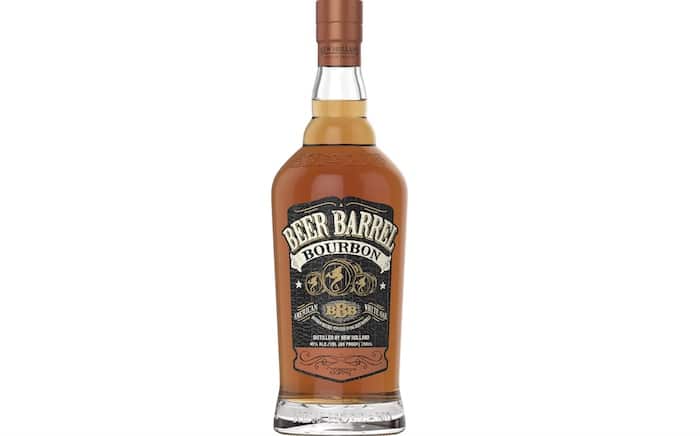 Vital Stats: Aged in new white American oak for an unspecified time, this bourbon hits the low end of the bourbon proof at 40% ABV. They finish off their aging in Dragons Milk barrels for three months. The bottle runs about $50 if you order it to go from the distillery.

Appearance: This bourbon has a light hint of red in the hue, giving it the appearance of light maple syrup.

Nose: I got red apple on the front of the nose, followed by a more dominant cotton candy. The sweetness overshadowed the fruit on subsequent sniffs. There are yeasty notes and a hint of soft caramel, banana and oak.

Palate: Though it is not uncommon for liquors to take on a bit of a sweet antiseptic note on the first taste, this medicinal quality clung on for a couple of sips. It has a light heat and a pretty smooth mouthfeel. Once I was past the first few sips it became pretty easy to drink. It is sweet but light on bold flavors giving it an almost watery character. When the heat dissipated, I caught just a bit of spicy notes, but they were far from dominant enough to leave much an impression.

The nose and the palette do not line up. I was missing the fruit from the nose and never really got past the antiseptic hit from the first taste. This is a young tasting liquor which is a shame for the price point.