For the uninitiated, Mikkeller is the brand brainchild of Mikkel Borg Bjergsø, a math and physics teacher from Denmark who began experimenting with homebrewing in the mid-aughts. Ever since, he has worked with breweries worldwide to release experimental, innovative beers like the Imperial Stout simply titled Black. Upon initial release, Black was the strongest Scandinavian beer on record, sitting at 17.5% alcohol by volume. Moving forward to 2014, Bjergsø partnered with Braunstein Distillery, self-proclaimed “Danish whiskypioneers,” to distill small batches of the Black in to a whiskey-inspired spirit.

The uniqueness of the project did not end there. The finished Black distillate was then aged in various used spirit casks and released separately, each marked by a single letter to differentiate the types of barrels used. Among the selections, Bjergsø incorporated both Oloroso and rum barrels to add an additional dimension to this concentrated stout whiskey. Oloroso sherry casks were chosen to boost the liquid with flavors of dark chocolate, fruits, and nuts, while the rum casks (from the former Danish colony of St. Croix,) were chosen for the promise of a “round” and “smooth” mouthfeel as well as additional fruit notes.

While these ‘whiskeys’ don’t incorporate weasel excrement or rice, almonds, lactose, and cherries, they nevertheless mark a new level of creativity and exploration from the madness that is Mikkeller. 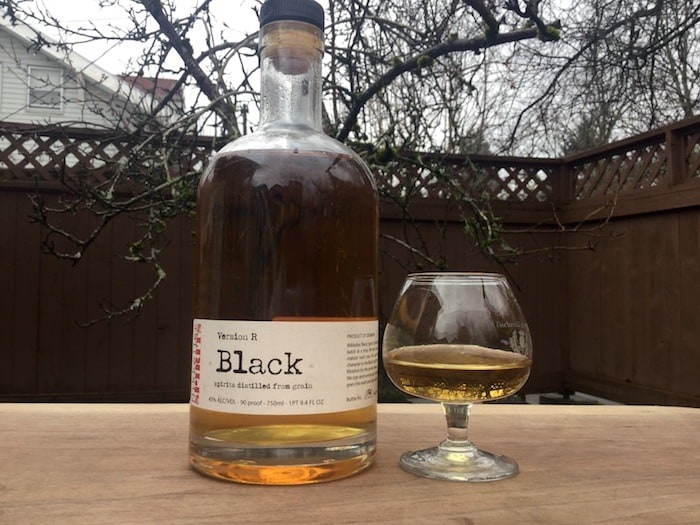 This spirit pours a golden yellow with touches of apricot around the edges. It appears visually light and springy, but provides ample, solid lacing on the glass. Aromatic heat and fresh baked sugar cookies compete for dominance in the nose, with hints of brown sugar, sweet orange peel, and even a note of freshly-mowed lawn.

The rum barrels add depth and roundness, as promised, which is a godsend as heat and boozy astringency are also present. Thanks to the aging, it maintains drinkability, and presents flavors of vanilla ice cream, Cheerios, and the earthy yet desserty tinge of holiday spice cake. A strange sweetness also lingers on the palate, reminiscent of diet sodas. A bit of a mess, but in possession of some unique flavor twists and mouth feel.

This version of Black pours significantly darker in color, bringing some burnt hay accents to the light, delicate distillate. It possesses the same bounciness and solid legging, and maintains an equally impressive clarity. The aroma is woodier, earthier, and more round. A phenolic, almost gluey aspect is present on the deepest inhales, which also find a competing, yet significantly more pleasant, oxidative quality reminiscent of dark cherry. The phenolic leaning also contributes a slight smokiness in the nose.

Immediately on the palate, the Version O seems older, wiser, and more mature. There is a sweetness there, but it lingers appropriately among the flavors of golden raisin, graham cracker, and more of that cassia-like spice found in the Version R. The sherry notes are present but muted, and serve as more of a fruity, desserty balance to the earthy distillate made from a bitter, sharp, roasty Imperial stout. For beer drinkers that have enjoyed dark ales aged in wine barrels, many of their favorite flavor dichotomies will be found in this bottle.

The collaboration here between Mikkeller and Braunstein Distillery is certainly an achievement of incorporating beer, whiskey, and either rum or sherry in to one somewhat familiar drinking experience. What we have here is not the apex of experimental barrel finishing, but the Oloroso version certainly showcases how even the strangest idea has the potential to create harmony in a new world whiskey. Your money could certainly be spent more wisely, but fans of Mikkeller's ouevre will not want to pass up the opportunity to try these.