Editor’s Note: This whiskey was provided to us as a review sample by Middle West Spirits. This in no way, per our editorial policies, influenced the final outcome of this review. It should also be noted that by clicking the buy link towards the bottom of this review our site receives a small referral payment which helps to support, but not influence, our editorial and other costs.

Rye whiskey must contain at least 51 percent rye. That’s in contrast to bourbon, which must be at least 51 percent corn – but, of course, can still contain rye as a “flavoring grain.” Rye tends to add a little heat and spice to the palate, although, like bourbon, rye whiskeys can also be smooth as butter and sweet as candy.

Middle West Spirits uses the term “dark pumpernickel” on its Straight Rye Whiskey. They’re borrowing the phrase from baking, where pumpernickel rye bread is made with flour ground from the whole rye berry. That’s in opposition to regular rye flour, which is made from the interior of the rye berry (also called the endosperm) with the outer layers removed. “If we were talking about wheat instead of rye, this would be the equivalent of ‘white’ flour. The darker color of rye flour is due its ash content, which varies according to how each particular brand is milled,” says the Exploratorium.

If you’ve never heard of a dark pumpernickel rye whiskey, you might not be alone. Middle West touts this straight rye whiskey as “America’s first Dark Rye Pumpernickel Whiskey.” They also describe it as “handcrafted from scratch” and “made in small batches.” It’s aged at least three years in new American white oak casks. Beyond the Straight Rye Whiskey, Middle West also offers a white rye in addition to several other whiskey offerings, many of which you’ll find reviewed on The Whiskey Wash. 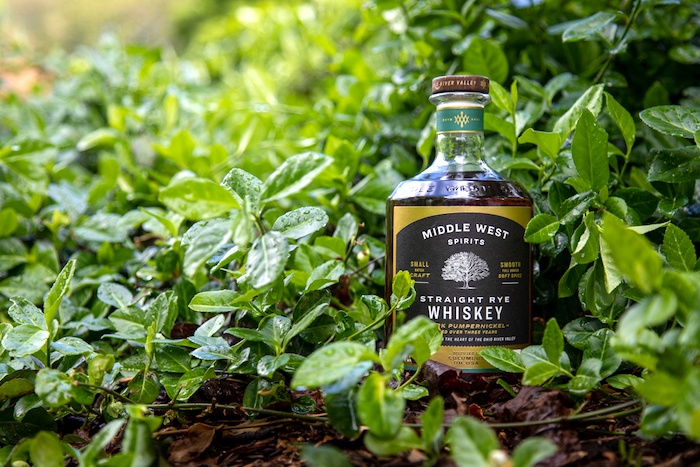 Nose: It’s strong on alcohol and turpentine, but when you dig a little deeper you can pull out some other great notes. On my tasting I detected bright amaretto, brown sugar, faint cereal, and rye grain.

Palate: I notice toasted nuts, dried grass, warming spices, leather, and raisins. There’s some slight oak and charcoal as well. The finish is gently smoldering – not smoke or peat, but a little of that campfire atmosphere.

To me, this is not very distinct but a subtly different spirit. It's bold and strong, with a lingering mouth tingle. A very pleasant sipper. I'm curious to see how this spirit could change a typical rye cocktail.