What would one day become Michter’s was once a distillery in Schaefferstown, Pennsylvania, eponymous of founder John Shenk. He made whiskey from the locally popular crop, rye. Legend has it that Shenk was so good (or so persistent) at making rye whiskey that, during the throes of revolution, General George Washington bought his troop’s spirit rations from Shenk, and that liquor got the men through the punishing winter at Valley Forge.

In the mid-1800s, Pennsylvania Dutchman Abraham Bomberger purchased the distillery and named it after himself. Little is known about the distillery’s history during this period. Ownership changed hands several times, closed during Prohibition and became a commercial concern again in the 1950s, just in time to release their flagship whiskey during a recession. Struggle continued through the twentieth century as whiskey’s popularity continued to decline. In 1989 the distillery finally tapped out, declared bankruptcy and closed.

In the late 1990s, Joseph Magliocco of Chatham Imports and Dick Newman (former president of Austin Nichols), combined forces to adopt the trademark and resuscitate the brand. They moved it to the heart of American whiskey country, Kentucky, and this move gave them easy access to barrels of sourced bourbon.

These days, Michter’s is producing an increasing amount of its own juice and applying its own careful system to its maturation. Michter’s US*1 Barrel Strength Kentucky Straight Rye Whiskey is an annual release from individual barrels. They don’t disclose their mash bill, though their Director of Research and Development, Kyle Lloyd, says it’s a Kentucky-style rye recipe, with more corn and malted barley to smooth that spicy rye signature. 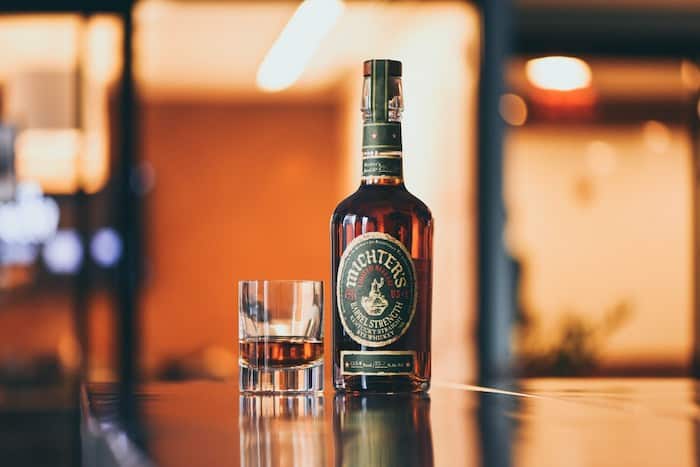 Vital Stats: This Michter’s whiskey is a whopping 109.8 proof, with an undeclared mash bill and aged at least two years. Bottles are found nation-wide and average $105 for 750 mL.

Nose: The nose is aggressive and volatile, smelling of acetone, clove, brown sugar and a faint whiff of raw almond.

Palate: This rye is quite hot and hard to ‘Kentucky chew.’ A drop of water helps the tongue detect more than just heat! Apricot, cereal sweetness and black pepper bloom on the palate. Banana and black tea dominate the finish.

While I appreciate that bottling at barrel strength means less dilution of flavor, this whiskey can use some tempering. Maybe I'd be happier with it after it spent a few more years chilling out; I just don't need that much booze in my booze, especially when it doesn't yet have the richness to balance out the burn.