Editor’s Note: This whiskey was provided to us as a review sample by Maker’s Mark/Beam-Suntory. This in no way, per our editorial policies, influenced the final outcome of this review. It should also be noted that by clicking the buy link towards the bottom of this review our site receives a small referral payment which helps to support, but not influence, our editorial and other costs.

Companies such as Beam Suntory already garner a large part of the whiskey market share, both domestically and internationally. Consistency, marketing, and sheer volume allow for such saturation. So, when they come out with special editions that are little more than their base recipe, un-diluted, I have a hard time getting behind them, and their blatant cash grabs with their loyal customers. Especially when there are smaller distillers and independent brands, such as Limestone Branch and Still Austin, that are putting out, in my opinion, superior products that are drowned out by the multi-million-dollar advertising and distribution campaigns.

Maker’s Mark has been around since the late 1950s when Bill Samuel’s, Sr. accidentally destroyed his family’s 170-year-old bourbon recipe. With the loss of his family’s legacy, he set out to recreate and improve upon the flavors that he had grown up with and to tame the sharp bite that some bourbons tend to trade on. There is no denying that the humble beginnings of Maker’s Mark are admirable and driven by a desire to bring something new to the marketplace. The flare for marketing was always there as well with the smartly crafted labeling, unique bottle shape and the signature wax dipped top.

I do appreciate that Maker’s Mark, though owned and distributed by Beam Suntory, manages to keep the original family in the mix. But with a focus on quantity and distribution, this company has grown into a juggernaut of recognition, if not in balanced and mature flavor.

As for the bottling I’m reviewing here, Maker’s Mark 46 Cask Strength was a limited edition release earlier this year that took this Kentucky distillery’s basic whiskey recipe and finished it with 10 seared virgin French oak staves inserted into its barrel for upwards of nine weeks. Normally an occasional distillery release only, it was put out to a wider market in celebration of a decade of 46 being on the market. 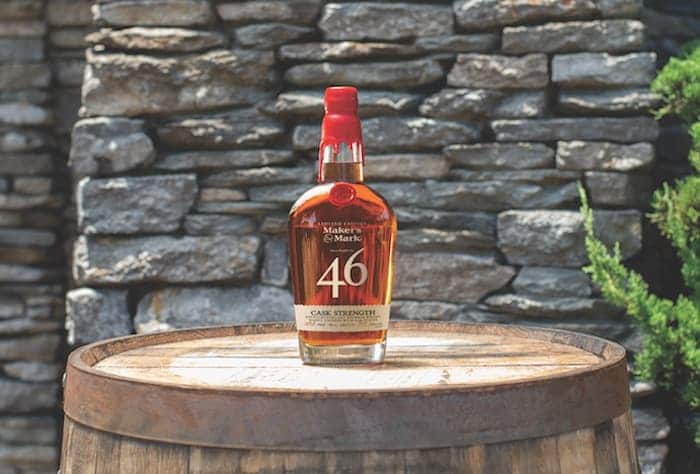 Appearance: The color is dark amber and when swirled, latches onto the side of the glass in a single viscous sheet.

Nose: Sweet, soft Caramel shines forth on the first waft, followed by a strong presence of vanilla. A hint of baking spices like cinnamon and nutmeg chase the back end of the nose and it finishes with a note of oak.

Palate: If you are expecting the caramel and baking notes up front, be ready for disappointment. The most prominent flavor I picked up was plastic, like an immature grain alcohol. The caramel makes an appearance after the whiskey settles onto the tongue a couple of sips in. Banana bread and cinnamon hit the middle of the tongue along with a sharp lingering heat. A medicinal aftertaste haunts the back of the palette as the whiskey is swallowed down.

Mass market whiskey has its place. It is crafted to appeal to the widest of tastes and to provide a palatable experience for a lower price point. When marketing an experience, it’s always better to focus on quality, not quantity. I feel that detail was missed when crafting this batch. It could make a reasonable mixer with its bold cinnamon notes and heat, but I would not recommend it as a daily or even special occasion sipper.