Editor’s Note: These whiskeys were provided to us as a review sample by Mad River Distillers. This in no way, per our editorial policies, influenced the final outcome of this review. It should also be noted that by clicking the buy link towards the bottom of this review our site receives a small referral payment which helps to support, but not influence, our editorial and other costs.

With an Ivy League degree in classics, a baking and pastry certificate from the Culinary Institute of America, and career stops at a Napa Valley winery and a startup vodka maker, Mimi Buttenheim clearly has a taste for the eclectic. So perhaps it’s no surprise that she eventually found her way to Mad River Distillers in the green mountains of Warren, Vermont.

“We make all our own spirits; we don’t buy anything,” says Buttenheim, who has been president of Mad River since 2015. “We use non-GMO grains exclusively from the Northeast and our mash bills typically have something a little bit different about them

“Our goal,” she says, “is to be one of the preeminent craft distilleries in New England.”

Not far removed from selling apple brandy at Vermont farmers’ markets, Mad River these days prides itself on distinctive mash bills and unique flavor profiles in its whiskeys. It is distributed in the Northeast and, in a limited way, in California.

Head distiller Alex Hilton believes the Vermont temperature swings might add to the distinctiveness of Mad River’s whiskies. Summers in the Green Mountains can be warm and the winters cold, with as much as 100 inches of snow around the distillery’s unheated rickhouse.

“Over the course of a year, our spirits see temperature variations,” he says. “I would guess that if you aged a barrel at a consistently low temperature, it would age slower than a barrel aged in a warm climate.”

Regardless, Hilton says, “I would say that our sweet spot for time in the barrel is two to three years, pretty on par with industry standards.”

“I don’t think there’s been enough research done on aging in a colder climate,” Buttenheim says. “We have very different temperature swings than a place like Kentucky. That’s definitely a part of our flavor profile.”

The bourbon and the Revolution Rye are flagship whiskies always available for Mad River at this point, while the Burnt Rock Bourbon reviewed here is available a handful of times each year, Buttenheim says. It’s one of the distillery’s limited-release bottlings, though it’s popular enough Buttenheim says they’d like to eventually make it part of the flagship lineup, too. 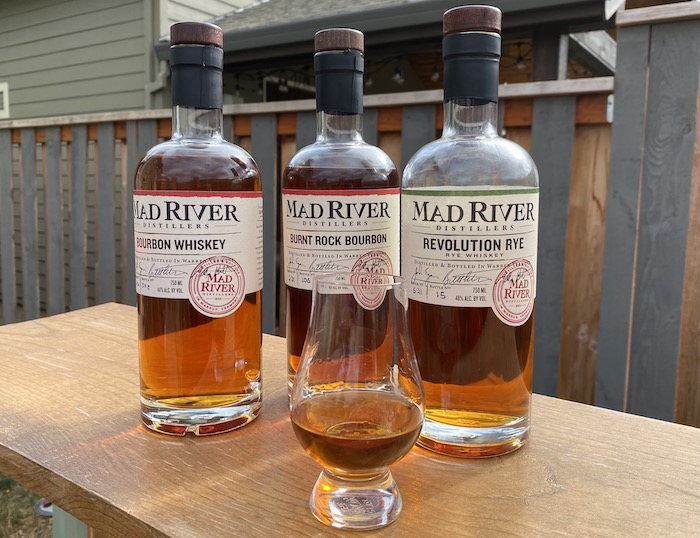 Appearance: Amber, reddish gold. Thin and oily legs on the side of the glass.

Nose: If Mad River wants distinctive, the nose on this one succeeded. The buttered-popcorn jelly beans from the BeanBoozled game came to mind – if you’ve never played the game, think of heavily buttered movie-theater popcorn. I also get a hint of honey, and more than a hint of the chocolate rye. If somebody put it under my nose blind-folded, I might have guessed this was powdered hot chocolate mix.

Palate: “There is no whiskey that’s 100% rye with chocolate rye,” Buttenheim told me. “Love it or hate it, it has coffee, mocha, chocolate. It doesn’t have that grassy thing you get with more traditional ryes. It’s just a different style.” She’s not wrong. The question is whether Whiskey Wash readers would love it or hate it. Rye fans are likely to be put off by how unusual this one is, although there’s no question it tastes like chocolate. I get tobacco and leather, plus a relatively long, chocolatey finish. (If I was responsible for branding at Mad River, I might find a way to list “chocolate rye” on the label. As soon as I began thinking about chocolate, the smell and taste made more sense. Expectation-setting might be important for something as unusual as this whiskey.)

Nose: Cloves, nutmeg, and citrus, leaning toward herbal. Certainly doesn’t smell like a traditional bourbon; I might have guessed rye in a blind sniff test.

Palate: Mellow with a soft mouthfeel, which came as a bit of a surprise after the nose. I’m not sure what the wheat proportion is, but this tastes like a wheated bourbon. I get slightly burnt (buttery) toast, hazelnuts, spiced apples, and white cake. Because it lacks some of the more traditional bourbon tendencies, this strikes me as a good whiskey to mix into old fashioneds or other whiskey-forward drinks. It’s smooth and easy, and will blend nicely.

Appearance: Brownish amber, with watery legs on the side of the glass.

Nose: Anise, fennel and orange peel. There’s something sweet and over-sugared going on, like candied citrus. It has just the slightest hint of smokiness.

Palate: Spicier than the flagship bourbon, owing to the rye content. Mad River says Hilton smoked barley over maple and then added it to a bourbon mash as an experiment, which is how he came up with this release. It stands apart from the flagship bourbon, a high-rye bourbon rather than a wheater. I don’t get much in the way of smoke here, though I’m a regular drinker of Islay Scotches – so my baseline for smoke is somewhat high. I taste hints of vanilla, raspberries, and, somewhat incongruously, barbecued pork.

Summary: No question, Mad River enjoys playing with its mash bills. It’s not a bad strategy for a craft distiller trying to carve out a niche. The chocolate emphasis in the Revolution Rye is like nothing I’ve tried before, and using heirloom corn – the multi-colored variety that comes in red, white, blue, black, pink, and green, sometimes called “Indian Corn” – gives the bourbons a distinctiveness I can’t deny. I wonder if Mad River has too many different types of liquor in production, including a wide variety of rums, whiskies and the original apple brandy, along with pre-made cocktails. It can feel a bit like you’re picking up something half-experimental from a Vermont farmers’ market. I’d be curious to see what might result if the distillery increased its volume on a smaller number of SKUs, focusing Hilton’s attention on fewer releases. But Mad River is a place not afraid to have a personality and to flaunt it openly. It’s a regional distiller using regional grains and doing everything from scratch. It will be interesting to see how the still-young operation evolves.