The Macallan Distillery 1824 Series ‘Gold’ Single Malt Whisky is not immune from the debate over the distillery’s 1824 series to which it belongs. The controversy revolves around The Macallan Distillery’s decision to structure 1824’s releases by color, even naming them based on their hues. Not vintage or style, but color is the primary demarcation for the “Gold,” “Amber,” “Sienna,” and “Ruby” whiskies in this line. The idea is the older the whiskey, the darker the color, and each release in the series maintains consistent color over different batches.

Critics say this is this a sneaky trick to blend in newer, less aged whiskies, without lowering the price, to make more whiskey, faster and cheaper, with fewer losses. But The Macallan Distillery says “using colour to drive and define a whisky differs dramatically from the conventional age approach, creating The Macallan Gold allowed us to explore different casks and base our choices on aromas and flavours.” This debate is the heart of the controversy.

The Gold is made in the distillery’s iconic “Curiously Small Stills,” each holding 3,900 liters and rising to less than four meters tall. Made from Golden Promise barley, two types of yeast are used during fermentation to raise the alcohol content and produce a nice mouth feel. The clear spirit is then barrel aged in a combination of at least 60% Spanish sherry seasoned oak casks from Gonzalez Byass Bodega in Jerez, American sherry seasoned oak casks, and American bourbon seasoned oak barrels. The distillery sees barrel aging as the main way their whiskies develop character. 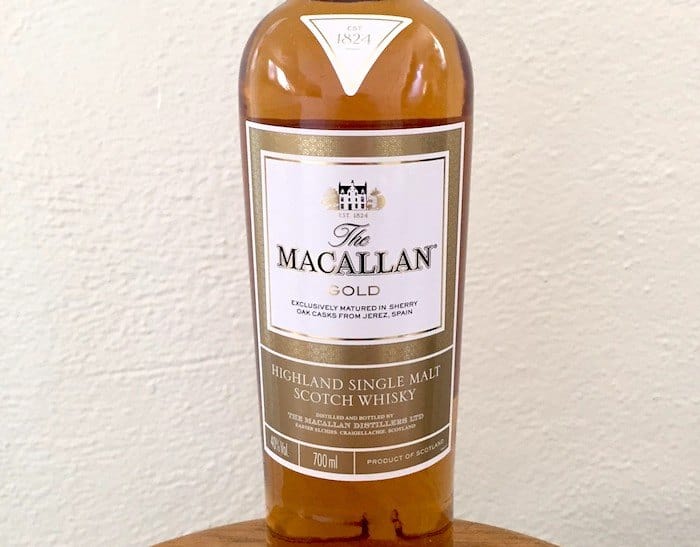 Vital Stats: This spirit is 40% ABV, non-vintage, and produced in first fill and refill sherry casks. It comes from the Speyside region in Scotland and is made from Golden Promise barley. This single malt retails for $35-50.

Appearance: The color is unique for a Scotch, a honeyed bright yellow like oaked chardonnay, deepening into sauternes and almost Courvoisier orange. It has nice, well-spaced legs in the glass.

Nose: Appealing aromas of sap, oatmeal cookie, and vanilla do not compete with orange cream and spice.

Palate: Smooth and viscous with frothy egg white and meringue flavors, this whiskey rolls over the tongue with big mouth feel, yet a shorter finish. Yummy smoked kumquat, bananas foster and bitter grape skin balance woodsy tannin and paprika. Even while the flavors are rich and sweet, the Scotch is not overly so. Ripe fruit and sherry flavors sneak in around the edges.

This whiskey is better and more interesting than its price suggests. It’s well balanced, rich without becoming cloying, and delicious!