Editor’s Note: This whiskey was provided to us as a review sample by Lonerider Spirits. This in no way, per our editorial policies, influenced the final outcome of this review.

From out of Raleigh, North Carolina, comes Lonerider Spirits, a sister distillery to Lonerider Brewing Company. Their first offering is a sherry cask finished bourbon by the same name. The brewery opened in 2009, with the intention of making “ales for outlaws,” meaning that they are making beer for those that consider themselves individuals and not just part of the general public. Outlaw is certainly the theme with their marketing, with bottle labels often featuring gun-toting animated characters and creatively named beers.

Fast forward to May 2018 and Lonerider Spirits is launched, with the announcement of starting things off with a bourbon. As with the brewery, the attitude is to go outside the norm with a spirit crafted to be different and not your “old man” whiskey. As a new distillery, the bourbon they have released is outsourced and finished in North Carolina, where it spent additional time aging in ex-sherry casks.

According to Chris Mielke, the president of Lonerider Spirits, they are looking to create a product for “today’s new audience of modern whiskey drinkers.” But what does the modern whiskey drinker look for? Fun and interesting barrel finishes are certainly a common starting point these days. Unfortunately, it’s not as easy as it sounds. Often times, the end product can be a bit funky and not necessarily in a bad way. It’s all in the hands of the master distiller and their intentions for the product.

The use of sherry cask finishes has been going on for hundreds of years in Scotland, but only recently practiced in America. I love a good sherry finish. A couple of months in that cask, and the result is a whiskey that is often richer and fruitier.  It can also be under or over done. As always, the goal is to enrich the juice that you’ve got. In this case, we have a high rye bourbon and likely seeking to soften up the spice notes and giving it some depth. 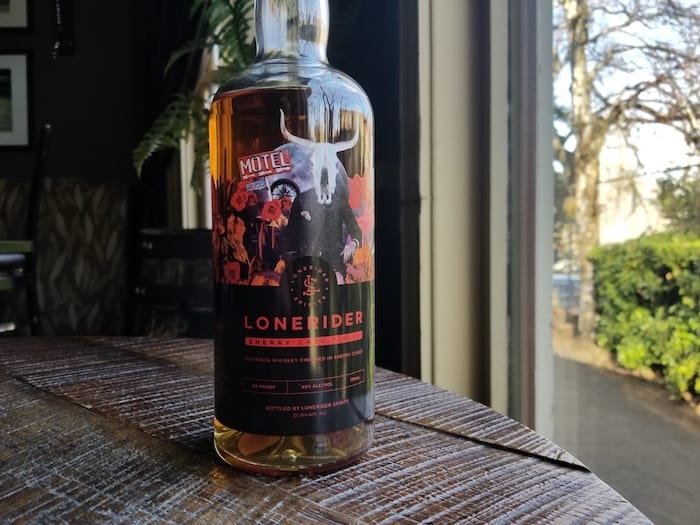 Palate: Sherry bomb from the get go. Some spice notes in the middle and a touch of alcohol burn. Medium finish with oak and caramel.

As mentioned previously, on the palate, this is a sherry bomb. Not quite balanced, it tastes more like a sherry-flavored bourbon.It's fine on its own or with ice, but could be a little tougher to work with as far as cocktails goes.

Does this bourbon successfully meet the interests of the modern whiskey drinker? Probably an easy sell, but not sure if one would come back for it. Practice makes perfect, so let's see what they do next.